Skip to content
HomeAlbum Reviews WQHS’ Albums of the 2010s 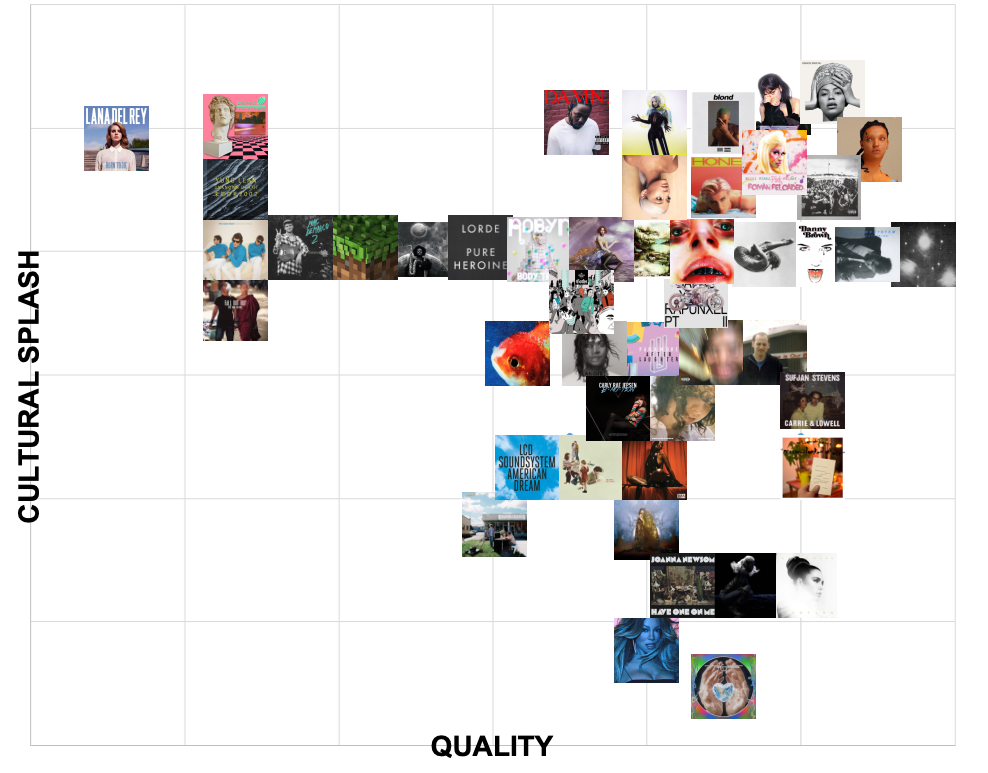 There’s an almost sacred obligation for every media publication to quantize and compile their favorites at the end of every year, decade, or century. For the most part, it’s really a great convenience to have a resource to find when trying to become acquainted with music history, especially if you weren’t around or paying attention. Still, there’s always going to be some incompleteness to the canonization as it prioritizes certain perspectives and lacks foresight.

Knowing that this format is imperfect, we’ve instead decided to veer away from comprehensiveness and objectivity. The WQHS list ranks albums on a two-axis format of “quality” and “cultural splash” with the only criteria for a record’s inclusion being that someone wanted to write about it. While “quality” is quality, “cultural splash” doesn’t refer to any one thing in particular. It could be influence, popularity, innovation or nothing at all. Mostly it’s a way of recognizing albums that in some way marked the decade regardless of whether they’re “good”. These albums aren’t necessarily the “best”, but had some kind of “2010s”-ness that we’d like to recognize.

None of our writers remember 9/11; this decade roughly marks our adolescence and formative years. Hopefully that perspective can add something to the deluge of “best albums 2010s” search results.

Halfway through the year I settled comfortably into the conclusion that music is no more than sounds and thus, lyrics do not matter. It still holds true, yet I find myself hanging onto Andy Shauf’s every word. Considering that I didn’t listen to The Party in full until October 2019, it’s something of a personal late entry. This album is unassuming at first: it’s arranged pretty delicately and Shauf kind of sings like he’s afraid to open his mouth. Then all at once, it’s crushing. Somehow, he succeeds in making these observations about a night of friends gathered together feel like the entire world. In short, he ruined my life. – Nour Elkassabany

I can only describe Andy Stott’s Luxury Problems as music for decomposing bodies. Would they writhe to it? Or would they thrash? Play it at my open casket funeral. Let’s find out together. – Gene Pak

Protest records can always play the part of being a little corny. But there is nothing corny about ANOHNI’s Hopelessness: a stunning record that plays with fatalist lyrical imagery supported by a topography of synths that sound like a supernova. It’s brutal, honest, and yet all the more arresting. Protest music has never sounded this hopeless. Protest music has never sounded this good. – Gene Pak

From whip cracks to granular moans, Arca provided us with more than just third-eye opening sonic geometry. She provided us a musically dense “phantasie” that made quotidian themes of love, sex, and heartbreak sound like an endearing night terror. – Gene Pak

In a vacuum, Sweetener is a victory all on its own. Sonically, thematically, aesthetically, this is Ariana Grande’s most fitting album to date. It’s just an excellent pop album with flawless vocals, equal parts emotional tracks and ass-shakers. Although she’s been cranking out hits over the course of her earlier discography, this marked a proper level up, thanks in part to Pharrell producing nearly all of the album’s best tracks. Situating it in ~the culture, however, reaffirms all the things we’ve felt for Ariana Grande in the past decade and why we care about her. Reaching all the way back to her Nickelodeon career, touching on weird bits like the viral donut licking/”I hate America” moment, continuing into the past few years where she experienced multiple life changing events, and while remaining in the public eye the entire time to weave it into her work.

Speaking purely facts, she was artist of the decade. Taylor Swift certainly did not release an impeccable live album mere days before Christmas. To conclude, all of the literal children who are massive Ariana Grande fans have incredibly high IQs. – Nour Elkassabany

Following Beyoncé’s complicated pregnancy and birth of her twins, she picked back up and made her live re-debut at Coachella in 2018. Her performance was absolutely astounding, with an emphasis on highlighting black talent in an ode to HBCU homecoming celebrations. The talent on stage was unbelievable, but arguably the most unbelievable part is how good Beyoncé sounds throughout the recording of the live performance, released as an album in 2019. Throughout the performance, Beyoncé flawlessly delivered a melody of songs covering at least 8 albums (between her solo releases and Destiny’s Child, not including song features like “Before I Let Go”, “Lift Ev’ry Voice and Sing”, and “Mi Gente”). Two hours long, her most complex choreography to date, and not a single note missed. The album and performance are a true representation of how clear it is that she is in a league of her own. – Matt Dougherty