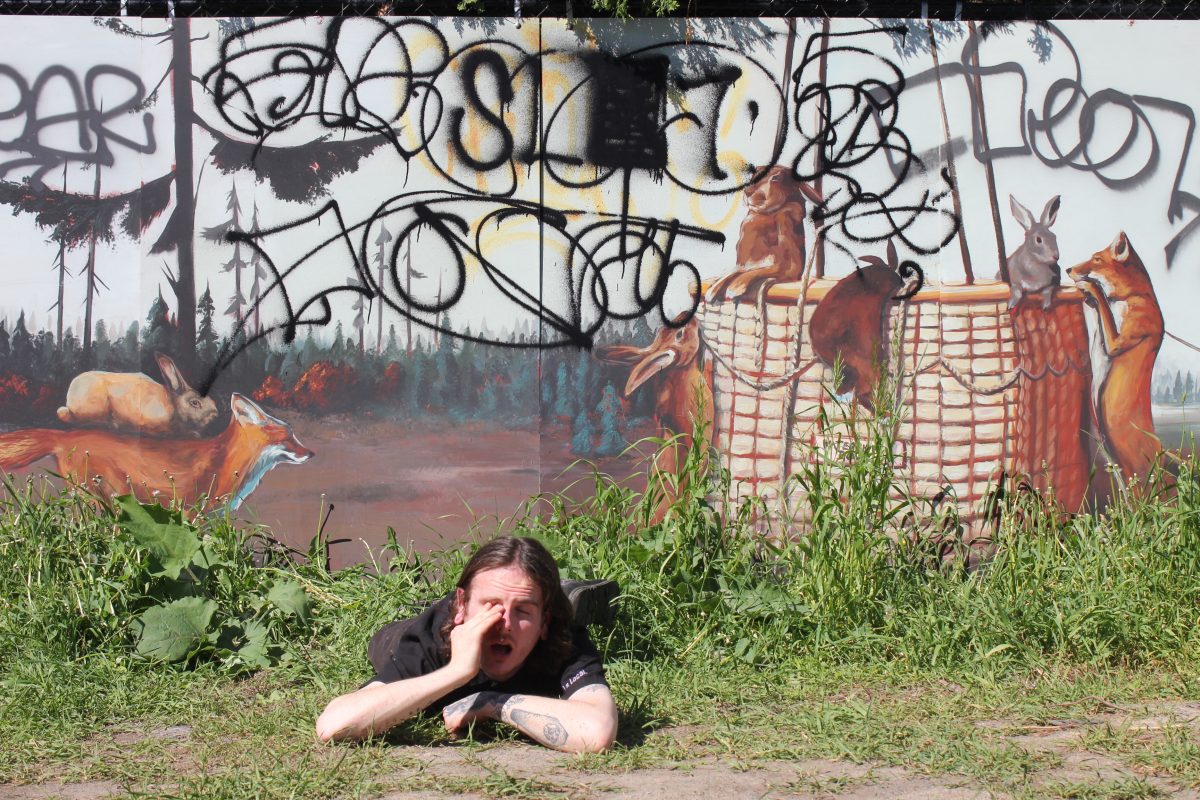 If sound were materialized, Touchstone would be the kind of music one keeps close to the chest, a precious knickknack from home we carve out a hidden space for, away from the world. A personal relic, the secrets buried underneath our beds. Unlike his previous album, Thumper, which spans over twelve songs, Molly Drag’s Touchstone comprises of seven tracks that don’t leave anything unsaid, each song bearing its own weight and reverence, cohering into a tightly-knitted whole. A collective unit, or a kind of family.

Indeed, family, and all the tangled history that comes with it, seems to be what ties together the collection. “This album, more so than previous ones, I had a lot more resolution with people from my hometown,” Hansford says. Michael Charles Hansford, the Montreal-based artist working under the name of Molly Drag, describes his process to me from New Orleans, his fifth time touring the U.S. “Especially me and my mom, [we] finally saw each other for the first time in like, three years, last spring.” The lyrics, he realizes, are often applicable to his relationship with his mother, and how that relationship lingers and persists, affecting those we later have with others as we grow up. “It’s kind of like an Electra Complex stuff.”

Though never explicitly narrative or autobiographical, the lyrics in Touchstone retains the same kind of intimacy we might imagine between a parent and a child, or between two lovers. Perhaps because personal histories are woven into the very fabric of the work in so many ways. The name of the album, Hansford explains, comes from Ila Kellermann, an artist and retired high school art teacher important in his teens, who called him a “touchstone” student in a recent email, and who painted the artwork of the album. And the second track of the album, “Charlotte,” boasts one of the most resonating lines in the album: “Broken homes / that brought us up / Can we go back now / and set them on fire?” which brings that question of motherhood to the forefront. As though beseeching the listener on a quest alongside him, we inevitably wander back to memories of our own childhoods, homes, histories.

Touchstone begins with “Not Long Now,” a track that seems to occupy a sort of liminal space between leaving and staying, laden with emotional lines that provide brief but significant glimpses into a life, where “you’re beggin’ me to leave.” It trails off with a sound reminiscent of church bells tolling, with all of their mournful quality, perhaps signifying both death and rebirth. Yet its continual, repetitive, loopy, melody and rhythm can’t help but make us wonder whether we are doomed to arrive at the same result even as we leave somewhere and begin again somewhere else, a constant do-over, only that the view is now different; whether it is truly possible to escape the past after all. Can we ever achieve redemption?

“Out Like a Light,” the third track of the album, seems to describe precisely the kind of purgatorial experience of breaking free from the past. The track, like others, showcases Hansford’s wide-ranging abilities, from his tonal variations to his vocal range. At one point in the song the guitar seems to take on a life of its own, as the word “light” in the first iteration of the lyric “out like a light” gets absorbed by the instrument, reifying its own message, and as if signaling a descend into our deepest subconscious where even words can’t reach us. As we “dig up the dirt / someone always gets hurt / clean,” and we enact a return, but re-emerge from it all changed, having struggled (“push / pure / pain”), but reincarnated again.

The title track of the album, and the second to last track, “Touchstone,” is both musically and lyrically playful, while “Cherry Red,” the last song in the collection, marks the most decisive shift in tone. With a faster beat and crisper sound, more acoustic and varied percussion, the lines are read, not sung, by a voice warped beyond recognition. From a sound that might be generally characterized as ‘dreamy,’ Touchstone lands lastly on something deeply cosmic and primal, like something flung from outer space. The line “looking back / we could see it burning” is evocative of “Charlotte” and the burning of broken homes, circling listeners back to where we began, and, finally, landing on the question of “Will I give in?”

The subtle range of emotions that span throughout Touchstone expresses themselves most clearly once we give, in turn, the attention and intimacy it offers up. A collection held in precarious balance, where even as “anxiety is eating at my head,” I’ve also “pulled through the worst”; where we have the privilege to share in radical self-exploration. As Hansford remarks, “Even though it still sounds kind of depressing…It’s actually my most hopeful album.”

A recording of the full interview is included below.