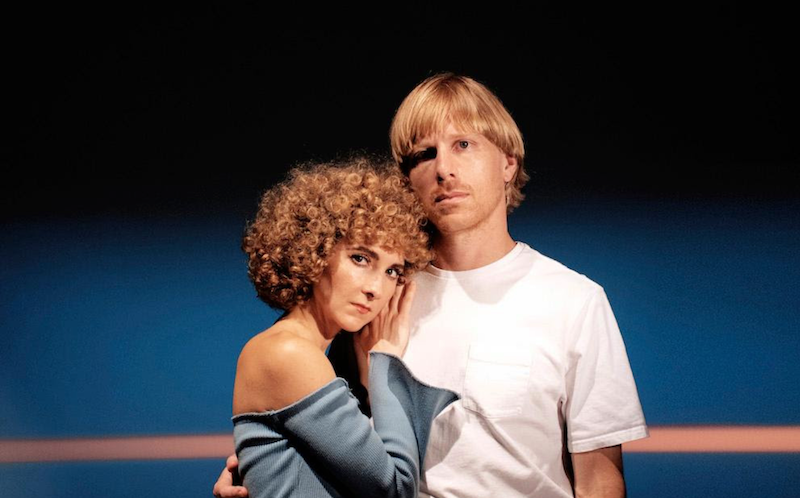 Comprised of the husband-and-wife duo Alaina Moore and Patrick Riley, Tennis has been releasing full-length album since 2011, and, without ever losing their distinctive retro flair, the pair’s sound has only grown more refined. Though Tennis is scheduled to perform at Union Transfer in late April, amid recent events and other concert postponements, whether the tour will still take place is uncertain. In the meantime, their latest album Swimmer, released on Valentine’s Day, is a stirring record that locates love within timelessness, and can perhaps bring solace in its tenderness.

Opening track “I’ll Haunt You” is a gentle piano ballad that showcases lead vocalist Moore’s alluring and honeyed voice, rounded off with a vintage tone. It begins with a quietly evocative scene: “As the sun slips / over my shoulder / I can tell I’ve / been getting older.” As choral reverberations of the verse set the ethereal tone for the rest of the album, the chorus ramps up with the addition of drums, whose kick continues to subtly accent part of the verse the second time around. With the romantic poeticism of “Only you / make this rock spinning / off to nowhere / much more appealing,” “I’ll Haunt You” draws us into a hazy, immersive world.

The song is followed by “Need Your Love,” “How to Forgive,” and “Runner,” three of the most mesmerizing tracks in the album. Texture-filled and rhythmically driven, “Need Your Love” is sprightly with an edge. With lines like “Baby you’ve got more poison than sugar,” the song flirts with danger and thrill, where the sudden tempo switch into the chorus catches us off guard but keeps one foot on the ground, and the bursts of guitar strums both imbue energy and verve and maintain a sense of structure. “How to Forgive,” on the other hand, is smooth and airy, underlined by a buzzing and slightly jazzy bassline. Musically warm and lyrically earnest, the track is filled with a throbbing ache and craving, as it is “hard to resist, harder to give up my bad habits.” “Runner,” lastly, builds on the same diaphanous atmosphere, capitalizing on even higher pitches and explicitly religious references of “lead me to the promised land / Your mamma is only a famine.” Mystical and abstract, catchy and just a bit uncanny, “Runner” captures a transcendental sound that is instantly appealing in its slight eccentricity.

The second half of the album engages in a folksier, meditative style — “Echoes” combines a bright electric sound with an occasional acoustic guitar. More lighthearted in tone, it is nevertheless contemplative in style, where ruminations of “Once I was young / Those days are gone / Suddenly I’m thirty-three / and on a gurney” and “Oh where the time goes? / Who really knows?” remind listeners of Tennis’s lyrical devotion to an experience of love that is more mature, fully grown, and often marital: “Oh to love you and be loved / to have the final memory of you compounding.” The following track “Swimmer” lulls as a current, and “Tender as a Tomb” is light and fluttering. It paints an idyllic scene of “My heart leaps over the concrete / oh I live for you,” mimicked by the springy plucking of the electric, and offers idle delights in “I would never try to explain / how it felt when we kissed.”

Penultimate track “Late Night” proves to be a standout in the latter half of the record, returning to a sense of drama and mood. Moore’s vocals open with a rich tonality that flows without ebbing, and with powerfully crafted lines such as “Like Mary Magdalene I’m on my knees / but if you see me as a saint / you’d be mistaken,” the song moves with the ethos of the heroic, continuously climbing until “I think I’m finally / feeling free / for the first time / for the first time.”

“Matrimony II,” the last track in Swimmer, echoes “I’ll Haunt You” in the format of the stripped-down piano instrumentation. Recalling astronomical allusions with “Baby we’ve / been orbiting / each other helplessly,” “Matrimony II” is grand in scale and intimate in affectionate confessions of “I could never find something better / I even changed my name.” Referencing “Matrimony” from their 2017 record Yours Conditionally, “Matrimony II” reaffirms the endurance of marital bond, embracing the embellishing and ceremonial, as single notes tumble down in the last part of the song followed by a final iteration of the chorus, which Moore sings with vehemence and passion. At once definitive and interminable, Swimmermanifests a moment in suspension, “held like the longest breath” (“Matrimony II”).