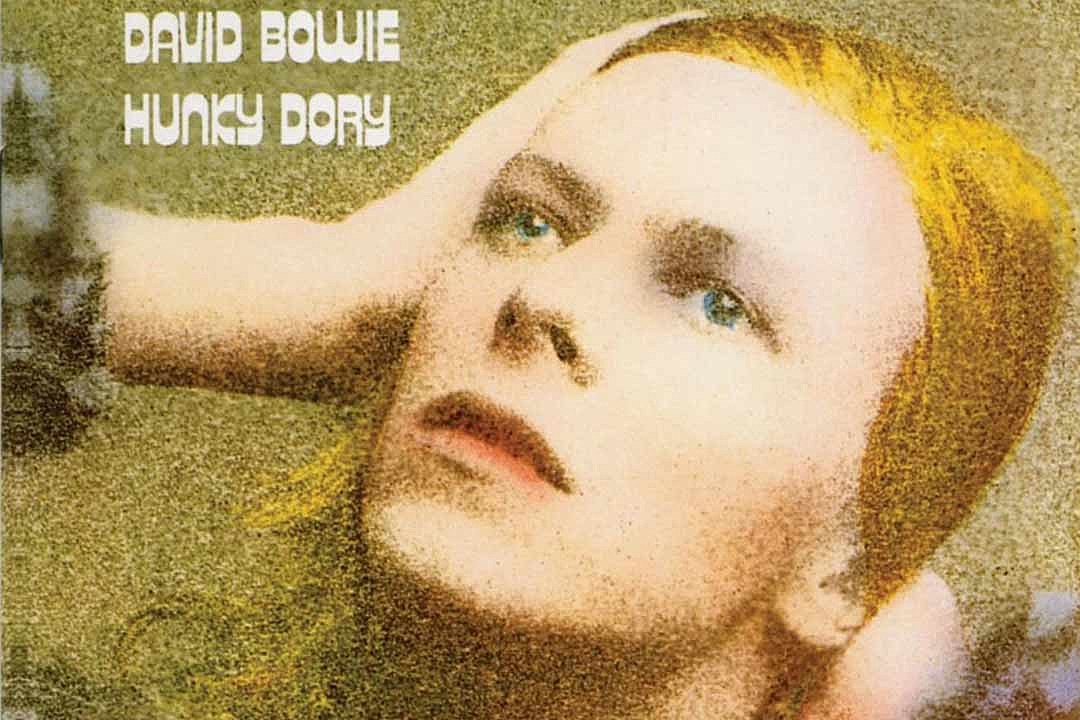 Bowie is an undeniable rock superstar. The man was a creative chameleon, whose many–faced influence still reverberates in music today. With an oeuvre as large as his, it’s inevitable that some of his work stands out over the rest – most often The Rise and Fall of Ziggy Stardust and Aladdin Sane, sometimes leaving the masterpiece Hunky Dory as an afterthought, which is far from the place it deserves.

Hunky Dory brings us Bowie in the early parts of his effeminate phase. His previous album, The Man Who Sold the World, has cover art that features a long–haired Bowie draped over a sofa in a dress. The cover art for Hunky Dory shows him pushing this same golden hair back from a close–up of his face, accented with makeup, making him look like a female movie star of the 1950’s. Behind this dramatic portrait though, lies the profound and exploratory songwriting of Bowie’s early career.

The first song of the album, “Changes” opens with a slow progression of chords that transforms into a driving beat backed by a crescendo of horns and hit on the snare. The rhythms continue this undulation of soft and slow to loud and lively as Bowie croons his poetic lyrics and further beats out their meaning with one of the more memorable choruses of rock and roll history. It’s a basic structure, but Bowie gives it a flow by prolonging the horns and strings so that they melt the different lyrical sections together into one flowing piece.

Bowie’s lyrics in “Changes” could read like a poem if they stood alone, and it’s not the only on the album that follows a similar style and format. In fact, the third song of the album, “Eight Line Poem” is actually a musical delivery of an eight–line poem that Bowie wrote. Despite the sparse amount of words in the song, it runs almost three minutes in length, displaying Bowie’s skill in letting the piano chords and guitar notes communicate with each other as if they were human voices themselves.

He carries us into the middle of the album with the power of “Life on Mars?” which is one of the better–known songs of his career. Bowie wails into the microphone about cosmic scenes of confusion in a song that perfectly layers both acoustic and synthesized sounds so that they bring some order to the nonsensical lyrics in a way that wouldn’t be possible with any other artist.

But looking at the effect of each individual song is only one of several lenses through which to look at Hunky Dory. Considering it as a whole brings glimpse of Bowie right before the pinnacle of his stardom, as The Rise and Fall of Ziggy Stardust was the following album. Each song shows the different influences that contributed to Bowie’s sound from the beginning, whether it be the folksy ballad “Kooks” or the prelude to glam rock, “Queen Bitch.”

Hunky Dory follows Bowie’s visit to the United States, from which at least “Andy Warhol,” “Song for Bob Dylan,” and “Queen Bitch” were directly influenced. They help to give the album an undertone of what it means to find success through fame, especially in the culturally consumptive environment of the United States. It’s a haunting preview to the same fame that Bowie would go on to experience mere months later, as he transformed into Ziggy.

But even though his immediate follow–up to Hunky Dory was a pursuit of glam rock, the later phases of Bowie as Aladdin Sane, the Thin White Duke, a hero, or Jareth the Goblin King (okay, maybe not that one), can all be traced back to a different part of this album. The words and sounds behind Hunky Dory bring us the post–Major–Tom Bowie, whose spaceship doesn’t quite know where to go, but is finally starting to figure it out.