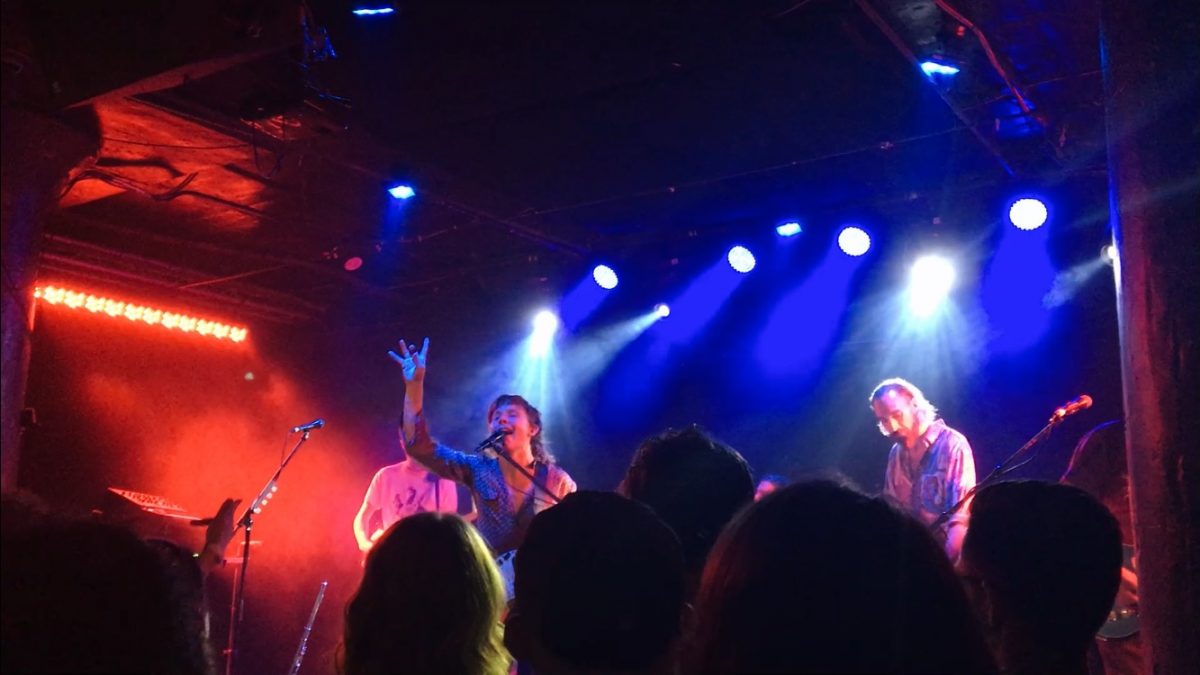 “Is this your first time seeing Pond?” another concertgoer asked my friend and me when she overheard us note the flute that had just been set up onstage alongside multiple guitars and synthesizers.

My own experience as a Pond listener has always been solitary. I’ve spent summers (plural) getting to know the expansive tapestry of Western Australian rock bands they’re adjacent to, its threads made of shared members of the different groups. During closing shifts at work, I crank up their Pandora station loud enough for the sound to carry out of the cafe and into the larger lobby of the building we’re nestled in. Sunday night was my first opportunity to share their music with anyone, and everyone in the room looked like a regular.

The girl from earlier had walked into the crowd towing three of the band’s vinyls, including a copy of their forthcoming live album, Sessions, officially set for release on November 9. Another older man in the crowd had his hands thrown up in rock horns for what felt like the first several songs of the set. A pause between songs quickly devolved into fans calling out the tracks they wanted to hear, hitting nearly all eight of the band’s albums. The only thing that seemed to hold the group back from meeting the requests was their memory, Jay Watson joking that they’d need a historian to dig out the songs and reteach them.

However, it was actually one of their oldest songs that anchored the set. Lifted from their first album, “Don’t Look At The Sun (Or You’ll Go Blind)” has been a mainstay of Pond’s live set for ages. It was only fifth in the lineup, but it signaled the real start of the show for me. After the measured not-totally-slow slow burn of the first four songs, DLATS made way for a heavier groove, apparent in the crowd’s movement and the freshly broken string on Watson’s bass. While he saw about a replacement, singer Nick Allbrook took the opportunity to sort of politely crowdsurf because “there aren’t that many of you” and was soon hanging from a ceiling pipe. From there, the band unleashed funkier, jammier selections, mostly staying faithful to their two latest albums, 2017’s The Weather and 2019’s Tasmania.

Throughout the back end of their set, different members of the band repeatedly expressed gratitude to the crowd: Watson for everyone going out on a Sunday night, guitarist Shiny Joe Ryan for seeing so many familiar faces from previous stops in Philadelphia, and Jamie Terry wordlessly smiling as if he’d never enjoyed a show as much as this one.

Although it took me three missed Pond shows over the years to finally make it to one, I can’t help but reciprocate that gratitude. They’ve been generous to listeners with their abundant musical output, gradually evolving and refining newer material while never truly leaving the old stuff behind. Still buzzing from the encore of “Giant Tortoise/Eye Pattern Blindness” and “Man It Feels Like Space Again,” I left the venue clutching my own copy of Sessions, happy to join the ranks of experienced and loving Pond fans the next time around.