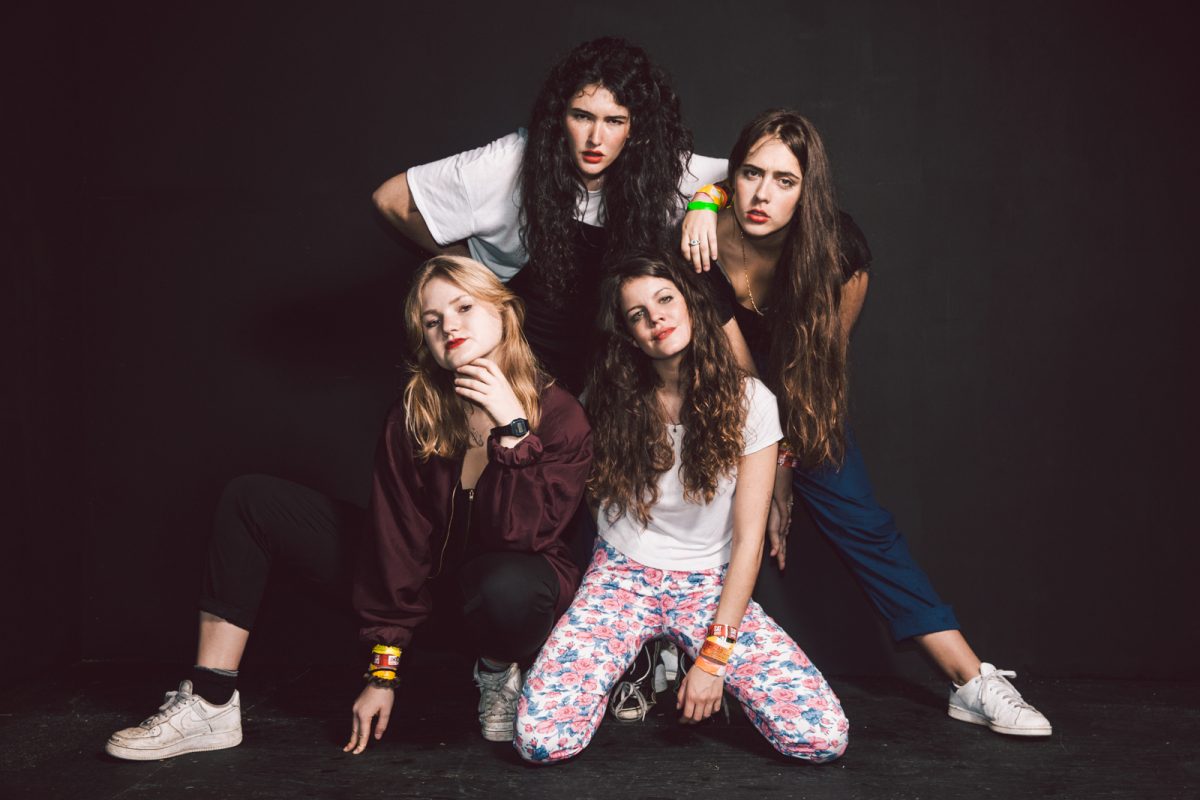 Hinds never gives anything less than every ounce of energy they have. In the past few months alone, they released their second album I Don’t Run, played 16 shows at SXSW, toured with Albert Hammond Jr., and have sold out several shows on their European tour. In what is too often a male-dominated genre, this all-female band from Madrid is quickly rising to the top as the modern heroines of rock.

Though at times sunny and warm, their sound is also charged with all of the energy of the garage rock legends they’ve opened for, like The Black Keys or The Vaccines. From their expressive stage presence to the honesty of their lyrics, Hinds has quickly come to represent more than just four girls who love making music. They are a role model and inspiration for the modern woman – one with a powerful independence and motivation to do the best for herself regardless of what anyone else thinks.

Now more than ever, with the onset of Soundcloud rappers and the DIY scene, music critics are again asking that age-old question, “Is rock dead?” Of course, the answer is and always will be no, but perhaps what’s prompting it so much is the fact those critics are looking for answers in men of the past. Instead, it’s time to focus on the women of now, the ones who are screaming and kicking and crowd-surfing with more energy than some of those boys ever had. It’s this dedication, commitment, and pure love of music that puts Hinds at the forefront of a new movement in rock music – one that’s led by women.

Read our interview with guitarist and vocalist Ana Perrote and bassist Ade Martín below to find out more about Hinds, and be sure to buy tickets for their show at First Unitarian Church on May 8.

The following has been edited for length and clarity.

WQHS: Let’s talk about how you first got started. What was it like touring in Europe before you actually released the recorded version of your first album, Leave Me Alone?

Ana Perrote: In the UK, which was the first place that wanted us to play there, I think it’s more common than in the US for bands to play on tour first and sell out shows. You drop one song, and that’s enough to blow up the Internet and the magazines and the shows. On the first tours we did, we had to play songs that weren’t even finished. We would call them teasers, because we didn’t have a long enough set, not even half an hour, so we’d have to play little demos of songs we had so far. It was crazy to grow up as a band playing in front of so many people already instead of in a rehearsal room. Every week we had something new, like an email or a call, and we couldn’t believe it for so long because everything was happening so fast.

WQHS: Do you think the UK helped make it easier to find success? Is the environment in Europe more helpful for when you’re starting out?

Ade Martín: I think there’s less competition. In the US there’s so many bands, everyone plays an instrument. It’s more difficult to have a band here in general, because everything is really expensive, and we have to rent out rehearsal spaces. You have so many bands in the US that there’s more pressure to make a difference, but I also think that your country is way more prepared to have tours and shows, and Europe is not as much. So, it’s not as helpful for shows, but it’s not as easy to have a band here, so there’s less competition.

WQHS: What made you decide to all be in a band together as friends?

AP: I started with Carlotta. We were the girlfriends of boys that were in a band together, which is how we met each other. For so many years separately, and then together, we went to so many shows and festivals. Our biggest hobby and passion was music. But I don’t think we realized that we could be in a band. Then suddenly one day, we took a trip – Carlotta had broken up with her boyfriend at the time – and we went to the beach. We were driving her mom’s van, and had so much space, so we were like “Maybe we can bring a guitar.” I knew how to play three chords, and she didn’t know how to play anything, so she said, “Maybe you can teach me.” We just started playing this Bob Dylan cover, and totally got trapped in the feeling. We didn’t do anything except play it again and again, and played with our vocals. I remember when we went to the beach one of those days, we got sunburns in the shape of guitars. Basically, it felt right – it felt good to do it. So, we were like “Should we start a band? Yeah let’s do it.”

WQHS: How do you find your place as a woman in rock and what does your voice give to the music?

AP: It really is an issue. We all used to go to shows, and we never saw a female on stage.

AM: Yes, I think it’s changing with this feminism movement that we’re getting right now. Women are empowering themselves, and there’s so many women now who are trying to do that through music. Not even having feminist songs, but just having a band is already revolutionary. This whole movement is becoming so big that women are doing whatever they can and whatever they feel like to support it. I think you can tell there are so many more bands that still have to get bigger and get to festivals. Having a band isn’t the hard part, it’s being recognized by media and the industry in general.

WQHS: Well, you guys definitely have that recognition. You just played 16 shows at SXSW earlier this year, what was that like?

WQHS: Who are some of you inspirations, especially female ones?

AP: We never had much female inspiration. We never idolized any female bands saying I love her music or I love the way she dresses, because we never got to see female bands perform live. We didn’t have that. We had men idols, and then we just happened to be girls.

AM: That was at the beginning, but now we try to have those role models. Like for example, we never thought of Patti Smith as being one of them, but now we’re starting to think about it like “We’re fighting about this, and they did too.”

AP: But not that many fully female bands.

WQHS: Your lyrics take a modern female persona. Someone who’s independent and has more confidence and isn’t dictated by what a guy wants or does.

AP: We really just express what we feel. We try not to be political about it, but I think we’re the only females representing this part of the world, and that’s revolutionary just by being girls on stage and having a voice.

AM: It’s true that we are really free in general. The way we are off stage is the way we are on stage. I think that’s revolutionary too. You see a lot of female pop stars, but you never see them with a beer in their hand or smoking a cigarette. You never see them swearing, laughing, or uh, dribbling – things that normal women do. But we do it. And you can see it. And I think that’s the revolutionary and modern part about it.

WQHS: What did you learn about the production process from working with Gordon Raphael [co-producer on the album]?

AM: We liked him because we thought he really got our vibe. He made us trust ourselves. Sometimes we would be like “Should we use this kind of sound or that pedal?” And his answer would always be “Whatever you guys like.” Because sometimes you’re in the studio and you get these insecurities about what is right or wrong. And he always would say “No, there is no right or wrong. It’s whatever you like best.”

AP: We used to record the vocals last, because we never thought we needed to rehearse them as much. But he would make us focus and sing the songs, stop us, and help us make our lyrics easier to understand.

WQHS: What are your plans for the future?

AP: We’re going to be touring until 2019, so no concrete plans for new music yet. We have the whole summer of festivals, and then we’re going back to the US after the summer.

WQHS: Last question. Favorite artist of past and present?

AP: My favorite artist from the past is Bob Dylan, and from now it’s Yellow Days.

AM: Mine is the Beatles. And the Strokes.