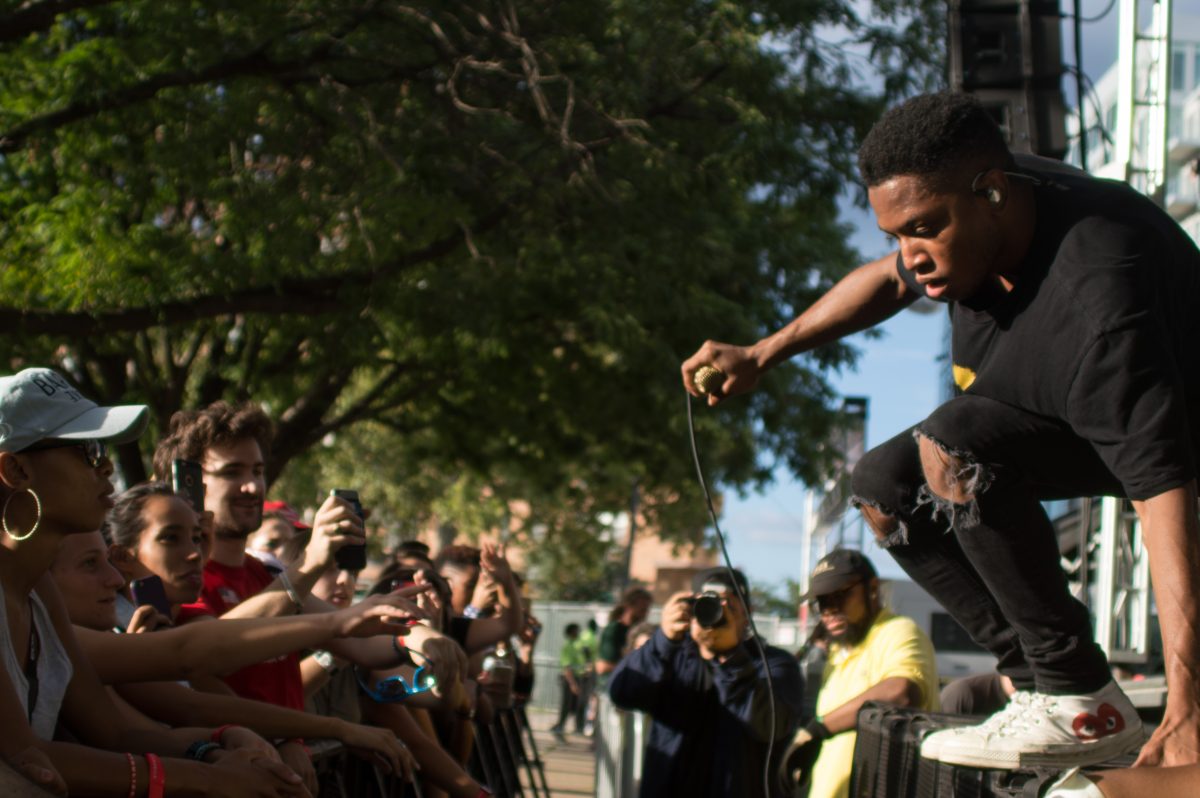 R&B superstar Gallant has had an amazing year, from being named a ­­­featured member of Forbes’ 30 under 30 to the release and subsequent Grammy nomination of his debut album Ology. ­­­­­­Just last week, he released a new track titled “Cave Me In”, a collaboration with South Korean superstars Eric Nam and Tablo.

In light of his recent achievements, WQHS wanted to bring back some of the highlights of our interview with Gallant back in September, when he performed at Made in America a few days after his show at the Foundry.

“I had put out this EP called Zebra a bit before, and I was in a bad place mentally, living in New York. I didn’t really vibe with New York, and I used a lot of nostalgic imagery of me as a kid, lots of black and white stuff [for Zebra]. I was working on the album and decided that I wanted to try and move past the nostalgia so I used a current photo of myself (as opposed to the baby pictures) and put a sad face on top of that to represent where I was coming from emotionally. I chose the color gold to represent an intention of getting to a better place at the end of it. I wanted to represent an optimistic look, a change in perspective, even if I knew that emotion [sadness] was always going to be with me for the rest of my life.”

On dancing and attacking the mic stand on stage:

“I cannot dance for shit. But yeah, if it doesn’t look like I’m having a medical emergency on stage then I’ll take that as a compliment. No, those weren’t my mic stands. I honestly did not like that mic stand. But then sI felt bad about it in the middle of the set so I had to apologize to it and I think we’re in a good place now.”

On his collaborative series “In the Room” in which he records with artists such as Seal and Sufjan Stevens:

“I was on tour with Sufjan Stevens last year and I got really sick towards the end of the tour. We were working on this idea to collaborate live on tour, but we never really got the chance. We were having a lot of fun, doing some Drake stuff, kind of joking around, but we wanted to do something serious. Unfortunately I ended up being too sick to do anything, so when I recovered like two months later, I hit him up when he was in town and we decided to just do it. I wanted to find a way to pay tribute to people that had inspired me for years, and I was lucky that he was the first one to agree to do something like that. And then I got the opportunity to do something with Seal which was completely surreal, and Jack Garrett – he’s incredible, a peer of mine. The people who I’ve done the series with have inspired me for so many years and I’m just so excited to be able to have them be a part of it. When I met Seal he just shook my hand and started singing a line of my song- ‘pullin’ my weight’- and he just made it sound like the song I had always wanted it to be.”

“I was in Seoul and I did not want to leave. I love that place. I grew up listening to a lot of J Pop and studying Japanese in college, but it’s crazy that the Korean music industry has completely dwarfed anything that’s come out of Japan.”

On how he started writing music:

“I started writing music when I was around 13, but honestly I was writing horrible music. Everything was terrible, but it all stemmed from me having so much alone time. I was able to do certain things and try to hit certain notes when no one was around so I never had to worry about anyone judging me in that space. And I was writing music just for myself- I had things to work out, I was a shy guy, didn’t like talking about my feelings and that’s how I did it. I didn’t care about being great I just wanted to get to a good place mentally and I didn’t have anyone to point fingers so just existing in that space allowed me to be really creative in expressing whatever was happening in my brain.”

On college at NYU:

“I didn’t do any kind of conservatory style music stuff in college but I did get the opportunity to study a lot of the sociological and anthropological side of music. It made me very self-aware. I got very cynical very quickly, I understood that music is a blip in the grandiosity of the entire universe so you can’t really take anything too seriously and you’ve gotta do it for the right reasons. It’s important to have that perspective in a culture that, specifically at NYU or in New York, focuses on the aesthetic of music, the outside appearance. So many professors told me “you gotta look like a star”, and they tell me “you don’t look like you could be on stage”. At some point I just decided, alright, that’s silly and I just don’t care. I’m glad I was able to read what I did and have an outsiders look on that scenario. Ironically when I gave up on that focus on aesthetic and decided not to be a part of the industry is when I started to meet people that appreciated honesty and doing something outside of the machine. So, if anything, college made me jaded enough to not conform, to not want to try and fit in to the industry.”

“I’m really interested  to see how I grow, just on a personal level- I’ve grown so much over the past couple projects. Hopefully soon Kingdom Hearts 3 will be out, so I’ll be playing some of that. I’m a very nerdy dude- [my producer] Stint and I went to Comic Con last year and it was the best experience of my life. I wanted to go again this year but shit got wonky.”