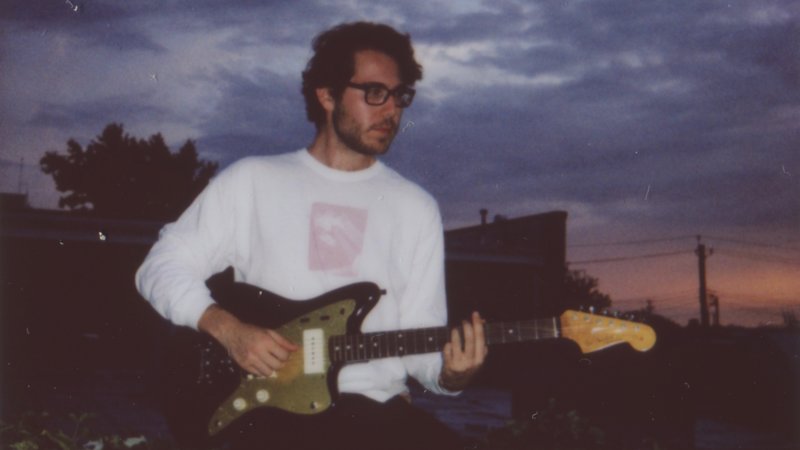 Harrison Lipton had to stoop to fit into the basement he played in that night. Beneath the smoke line that separated the living room and the underground venue, the ceiling was decked in plastic vines Christmas lights, giving it a mystical garden vibe. That was where the Brooklyn-based singer serenaded the crowd with his wintry R&B repertoire, the audience captured by his tenor. Despite his height, he has a comforting presence, wearing a green hoodie that looked like he’d been born in it, and amber hair that frames his cheerful face.

When I met Harrison at the West Philly house show he was playing, he paused frequently throughout the conversation to chat with other band members, or to talk effusively the bands he toured with. He spoke quietly, but with exclamation points.

The next day, we met up at a nearby café for coffee, joined by his friend and bandmate Noah Ross. Harrison was wearing the same hoodie, but was without his jacket, which he left at the venue. Noah sat next to him, clutching a mug of coffee in his lap, clad in all black.  We began by discussing their debut album, Loveliness, which is stylized on the cover to also say Loneliness.

“For this record, it was very solitary,” said Harrison, occasionally pausing to sip his bright magenta tea, “I wrote a lot of these songs in a single summer after college, questioning what I was going to be doing with my life. I had a lot of free time on my hands, so I built a makeshift studio in my parents living room in Connecticut, and just started putting it together piece-by-piece. I think that the title of the record is pretty indicative of how I was feeling at the time, which is that cross between loveliness and loneliness.”

The album has that sensation. Harrison described how that duality manifested in the album’s A-side and B-side “Someone told me that Side A is ‘Loveliness’ and Side B is ‘Loneliness’ and I didn’t intend for it to be that way, but now that I listen to it, it feels kind of accurate.” That all culminates on the closer, appropriately named “Loneliness,” where Harrison dips into falsetto at times, evoking Moses Sumney and serpentwithfeet while crying “I got all this time on my hands.”

When speaking on his song-writing process, Harrison got deep: “Song are like seasons, I don’t think there’s any rules. They’re all songs meant to be listened to and consumed and enjoyed. I honestly think about it both like this raw outpouring of emotion that will just hit me, and I can’t really do anything about it, and as a producer, trying to manifest those thoughts and feelings.”

Harrison got his start at a young age, getting his first keyboard at age five. “I had this very dinky Yamaha digital piano from the 90s,” he says, “and now I’m totally in love with all the sounds on it.” He later honed his voice performing in a community Gospel choir. “I would definitely say 100 percent I was a better singer than I am now. I had a very high voice, and started singing Gospel music, and I was the featured soloist from when I was nine onward.”

“Depending on where you were singing, there could be several hundred people there, and afterwards, I would have all these people coming up to me in tears, and very moved, saying stuff like I was a gift from God. I can’t understand that.”

“That really prepared you for the rock n’ roll lifestyle,” joked Noah.

Harrison does attribute a lot of his musical prowess to being in that choir. Despite much of the instrumentation coming from R&B and Neo-Soul, he draws a lot of his vocal power from the gospel choir.

“A lot of interesting people passed through there, too. Like the lead singer of Charly Bliss was also in that choir, Eva Hendrix. We had a duet together at one point. Also, the dude who wrote the music to La La Land, Justin Hurwitz, and his brother Tyler.”

He never ended up collaborating with those two on another project, but did find time to work with electronic music producer Giraffage on the song “19 Hours”: “I had sent a package of that initial EP, the first four songs of the record, to Salty Artist Management. They really liked them, but I sent them the day before the news about PWR BTTM broke, and they were managing them. They were like, ‘we love this, our hands are really full right now, but we’re gonna send this around the office.’

A copy ended up in the hands of Charlie Yin, the artist behind Giraffage, and he reached out to Harrison for the collaboration. “So, we bounced ideas off each other, and he sent me a bunch of instrumentals, and I wrote ‘19 Hours’ to that. I was just very lucky to have worked with him.”

I was also interested to hear about his music video for “Beacon,” which features Harrison as a cowboy in a frigid landscape, caressing a horse and wandering through fields, accompanied by three inexplicable dancers (Alex Bittner, Oda Johansen, & Toby Rae Irving). As Harrison makes his way through the terrain, he finds his way to a barn with an unearthly glow, where he enters into a Twin Peaks-esque dream sequence.

“I got thrown from that horse by the way,” Harrison added, “We had to cut a bit of that because Jake [DeNicola, the director of photography] was pivoting around the horse on a gimble. It got really scared, and it threw me about ten feet. I was pretty shocked after that, I did not want to get back on the horse. I was like, ‘You know what? I think that’s it for the day.’”

Noah interjected, “We had a show the next weekend, and you were like, ‘sorry if I’m not feeling it as, my neck is still stiff from being thrown off a horse.’”

They came back around to speak on their upcoming work, what they had planned for the future, now having more experience touring and playing for an audience.

“I think it’s more reflective of the band,” Noah agreed, adding, “Loveliness came out of your solitary creation, and we amended stuff on the new album to fit what we were doing live.”

Throughout my time chatting with Harrison, I couldn’t help but notice his propensity to bring up others. He continually got distracted by complimenting his bandmates, friends’ bands, or the team who helped with the “Beacon” music video. Despite his insistence that Loveliness/Loneliness was borne out of solitude, I find that hard to believe.