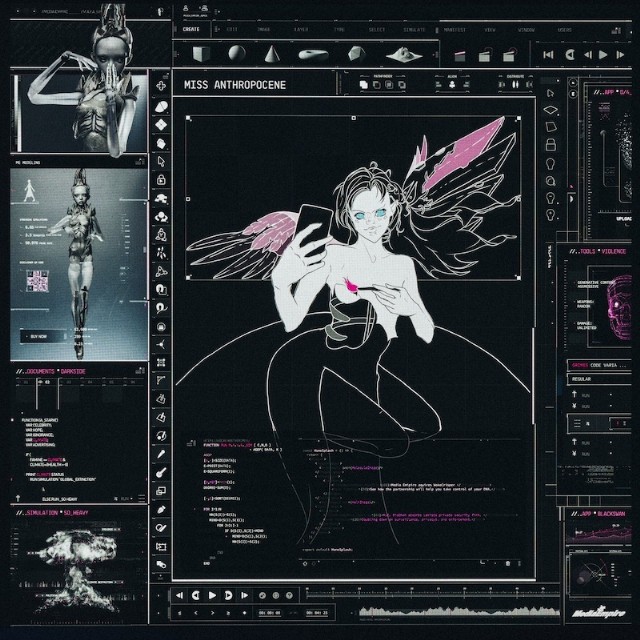 Is there value in an aesthetics of the climate crisis? Understanding climate change as both intimately personal and impossibly impersonal, singing alternately from the perspectives of human, earth, and machine, Grime’s Miss Anthropocene, released on 2/21 with Canadian label 4AD, paints a picture of the apocalypse which is at once bleak, romantic, and, in the artist’s own words, “fun.” In her first full album release since the 2015 Art Angels, Grimes plays with nu-metal, 90’s alt-rock, K-pop and Bollywood influences, layered over characteristic tight dance beats and a synth-heavy, meticulous attention to sonic detail. Conceptually, Grimes subverts the traditional imagining of the earth-as-violated-woman with an image of climate change as embodied by a vengeful and misanthropic goddess:

In the opening track “So Heavy I Fell Through the Earth,” lyrically connecting the loss of self in pregnancy to the destruction of our planet, Grimes establishes the album’s tone with a slow pan of a bleak sonic landscape. Delete Forever, an acoustic pop punk-esque ballad on losing friends to the opioid epidemic, recalls the brilliance of Oblivion in its unflinching expression of the personal-as-political. “4ÆM” puts a cyberpunk twist on a Bollywood sample to an eerily upbeat effect. “Violence” and “We Appreciate Power” are most reminiscent of the unrelenting tempo and cathartic energy of “Flesh without Blood” or “Kill v. Maim,” but all dance tracks on Miss Anthropocene are complicated by the album’s overarching dissonance. On My Name is Dark, Grimes hints at a decades-long legacy of alt-rock angst over our “imminent annihilation,” referencing Bullet with Butterfly Wings by name and echoing the beat and sense of paralysis of Radiohead’s apocalypse-cynicism classic Idioteque.

Contrary to the darkness of the project, there’s also an undeniable romance at the heart of the record. In “Before the fever,” Grimes wistfully sings: “This is the sound of the end of the world/I get lost/Can you get lost with me, baby?” In closing track “IDORU,” self-described as a “cheesy love song,” she sings “I wanna play a beautiful game/Even though we’re gonna lose/But I adore you.” Boucher, now seven months pregnant, occasionally pulls away from the frenetically upbeat sound of Art Angels to access a sincere, slowed-down sentimentality, made sweeter in light of impending loss.

Miss Anthropocene arrives at a time of both mass hopelessness and mass mobilization, and lends its voice to a growing category of pop records, both bleak and hopeful, which place themselves in a discourse with the climate crisis. Maybe problematically absent from Miss Anthropocene’s vision of the apocalypse is any sense of hope regarding our salvation, direct accusations of state or corporate responsibility, or the unromantic truth that climate change will affect the most vulnerable among us first.

But as Mark Fisher writes in Capitalist Realism: “The cause of eco-catastrophe is an impersonal structure which, even though it is capable of producing all manner of effects, is precisely not a subject capable of exercising responsibility. The required subject – a collective subject – does not exist, yet the crisis, like all the other global crises we’re now facing, demands that it be constructed.” What Grimes captures best about our climate crisis is not its human cost but the coldness of the system that has perpetuated our destruction. As a concept album, Miss Anthropocene speaks to the seeming impossibility of reconciliation between the subjective individual and the “impersonal structure” of the origin of the threat, drawing its energy and beauty from that anxiety at the heart of our contemporary existence.