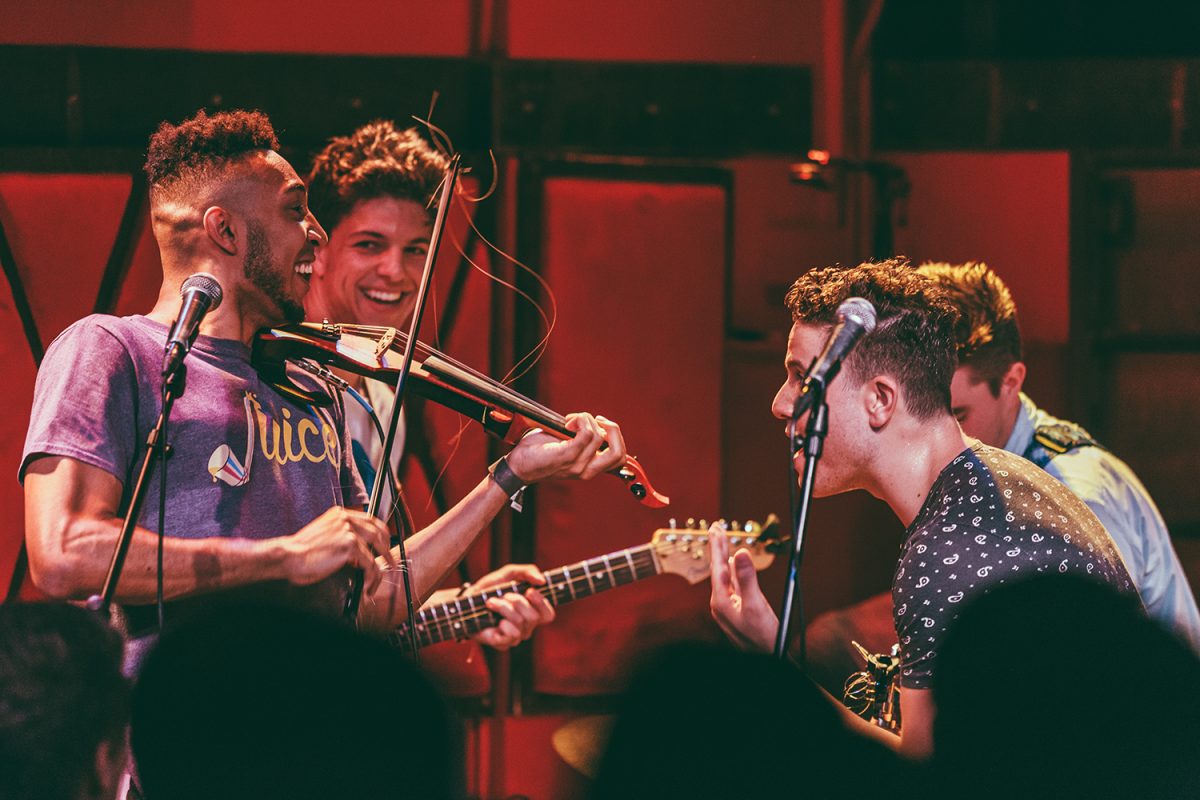 Part fortunate dorm assignments, part pre-freshman year Facebook conversations, and part pure luck brought the band Juice together at Boston College in 2014. We spoke with two members of Juice, guitarist Daniel Moss and violinist/vocalist Christian Rose, ahead of their show at Boot & Saddle on Thursday, February 15th, about the band’s music and their current tour.

WQHS: Listening to your album, people can definitely pick out a lot of different sounds. Could you speak a bit about your musical influences?

Daniel Moss: That’s a pretty big question for the band, because like you said, there’s a lot of aspects that show up in our music because of the diverse influences that have brought us to where we are now. In terms of bands that we can all get behind and love, we love the Beatles…

Christian Rose: Gary Clark, Jr. On the more contemporary, pop/hip-hop side, we all like Chance the Rapper. We all have different artists that we really really like, and it’s hard to be like “this is what influences the band” because for every song we make, there might be three or four completely different things blended together that make sense because we’ve been playing music together for so long. We have all sorts of influences, from rock to funk to hip hop to RnB to soul and it all sort of blends into this modern mix that has become Juice.

WQHS: When everyone is bringing something different to the table, how does that get incorporated into one, cohesive work?

CR: Practice. You know, the songwriting process is often slow and difficult but between all of us, we do a lot of compromising. We try to work until we find a sound that we like, and when we do like the sound, the product ends up being something really cool. Sometimes, one person will do more of the foundation of a song than another person, and that will be become a more genre-specific song we have, but a lot of the times, it’s a lot of compromise and a lot of working together.
We’re about to release a song on Friday, called “Sugar.” That, I think is the most all-encompassing, Juice-indicative song we’ve ever written and we’re really excited about it.

WQHS: So you’ve been on tour for most of the year so far. How is that going? Where are you now?

DM: It’s been awesome, it’s been super fun. We’ve gotten to travel, go south a bit. We were in Nashville doing some recording and did some shows down there, then went up through North Carolina and now we’re hopping around the northeast.

We’re in Jersey right now. We have a show in DC tomorrow and then we head over to Philly.

WQHS: Have you played here before?

DM: Only once in the city.

CR: Yeah, we played at Connie’s Ric Rac last summer and we played at Villanova [University] and Muhlenberg College, so kind of the Greater Philadelphia area a lot.

WQHS: Speaking of college shows, do you do anything differently for those versus a show at a lounge or another venue?

DM: Generally, we try and keep the integrity of our set, regardless of where we are. It’s always different playing to a big crowd in a theatre or playing to college kids, but we enjoy playing every show for different reasons.

WQHS: And if the crowd knows about Juice versus a crowd of new listeners?

DM: I think we kind of let it speak for itself in general. We’ll throw in one or two covers wherever we are. Like a kind of treat, but we trust in our set and we’ll play it wherever.

CR: We played at the Stone Pony this weekend in Asbury Park, we were opening for Pigeons Playing Ping Pong and a lot of bands hadn’t heard of us but we just treated it like we just get to play for a really big crowd. They’re really popular, especially here in Asbury, so they sold the venue out and we played our set and it went really well. I think the moral is that we just gotta play our set and generally people are into it.

DM: That being said, we do switch around the set. As much for ourselves as we do it for the crowd, we switch around the set. Reorder the songs, ask “are we gonna do this section a little differently?” Coming show to show, you won’t hear the exact same set, but we’re not calculated in which songs we play for which venues. We like to keep the live and spontaneous energy going and keep it fresh.

WQHS: Can you tell us anything about your new music? Any new approaches or sounds?

DM: The sound is always developing. When we recorded our last album, that was 2016, so I think that it’s not necessarily like “let’s go for this now.” I think it’s more of, “we were in a different place, we were a different band back then” and we’ve been a band for four years now, so every year, I feel like we’re developing. Sometimes, I think we’ll focus in on different influences, but for the most part it’s just a progression. I think the new stuff does sound different. We were lucky to work with our producer, he’s been a huge help, but I think it’s more of a development.

CR: Since we’ve developed as a band, every time you play music together, you get better. So I think from our perspective, the new stuff is, not that the old stuff isn’t good, but the new stuff is just better. It’s more indicative of who we are as musicians and as a brand right now, and I think you’re gonna hear “Sugar” and think “Wow, this is really cool.” At least that’s what we were like when we were recording. We’re just super excited for it.

You’re gonna hear “Sugar” and then the following single and then hopefully the projects that come out of that and I think we’re going to have established not a new brand, but certainly a brand that’s more indicative of our live shows and how we see ourselves at this point in time.