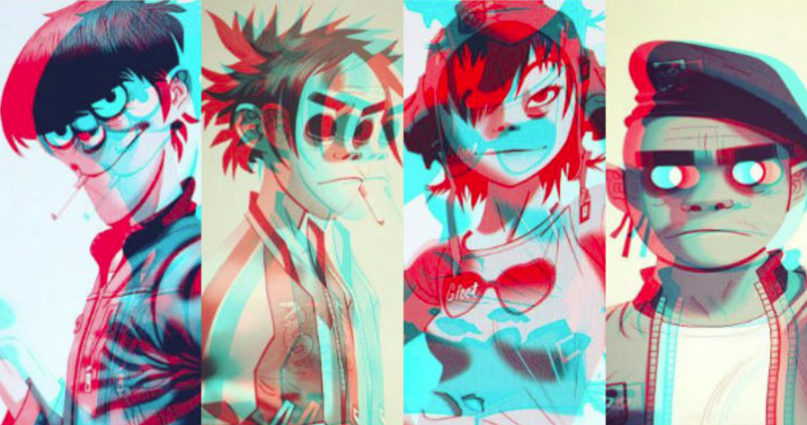 Virtual band Gorillaz has been teasing everyone for a while now, steadily dropping singles, remixes, a VR music video for “Saturnz Barz“, and an interactive app with exclusive Gorillaz content. Now, they have finally released their sensational album Humanz. It’s a tragic, dystopian concept album that wants you to dance until the world comes crashing down.Humanz began as a hypothetical idea for an album before the U.S. election, where Damon Albarn, co-creator of Gorillaz, would pretend that Donald Trump had won the election, and write songs to fit this dystopian nightmare. This idea is perfectly captured from the beginning, with Vince Staples on “Ascension” singing “The sky’s fallin’ baby, drop that ass ‘fore it crash.” The rest of the album follows suit, filling 120 BPM EDM with melancholy and foreboding lyrics of oppression.

The album moves through themes: “Ascension” begins the apocalyptic party; “Saturnz Barz” is a creepy and dark movement towards the danger zone; “Submission” and “Charger” bring the party back to full swing, with heavy electronic beats and the call for compliance; everything slows down and dies with “Andromeda” and “Busted and Blue”; the end is near as indicated by “Let Me Out”; and the album ends on a hopeful note, with the powerful and optimistic “We Got the Power.” These are all broken up by short interludes, notably “The Non-Conformist Oath” and “Elevator Going Up,” marking the tonal shifts.

Musically, there’s little actual instrumentation throughout; it’s almost entirely electronic, as a method to indicate a movement towards the future. The dancehall beats are kept up throughout the album, broken only by “Busted and Blue,” a slow track expressing anxiety towards the prevalence of technology in the future. The synths are sometimes fun, upbeat rhythms to tap your feet and move your body to. Other times, they drag, and make you feel uncertain of where they’re going. Maybe this is intentional, to express the uncertainty we feel in the future, or just another quirk of Gorillaz that only sometimes works.

Humanz is filled with hip-hop newcomers and rock legends, a rap-rock synthesis that works well for the most part, being subtle and careful with their mixture, and not forcing the partnership or under-utilizing the talent given. In “Andromeda,” D.R.A.M. has only a few lines but makes an impactful contribution that ties together the song. Jamaican DJ Popcaan takes the reins on “Saturnz Barz,” which feels more natural for the tone of the song. Rock rival Liam Gallagher of Oasis makes an appearance on “We Got the Power” with Jehnny Beth, a notable addition considering his and Damon Albarn’s 1995 feud, during which Gallagher stated that hoped Albarn would “catch AIDS and die.” Yikes.

The album is a welcome addition to the aftermath music of the 2016 election, and perfectly encapsulates the dejected disappointment many of us feel, injected with a sort of “dance your problems away” attitude. And rather than make this album from the perspective of a successful English musician, Albarn rather hands the controls over to others to tell their stories, centered around the theme of grief and dread. This creates a collage-like work, each song having its own distinct flavor, wonderfully threaded together by Gorillaz. At times its overdramatic, and other times it feels underwhelming and self-indulgent. It’s not perfect, but after all, Gorillaz is only humans.

Humanz by Gorillaz is available now to purchase or stream, and the group is touring North America in July.