Skip to content
HomeInterviews A Zoom Call with Ritt Momney 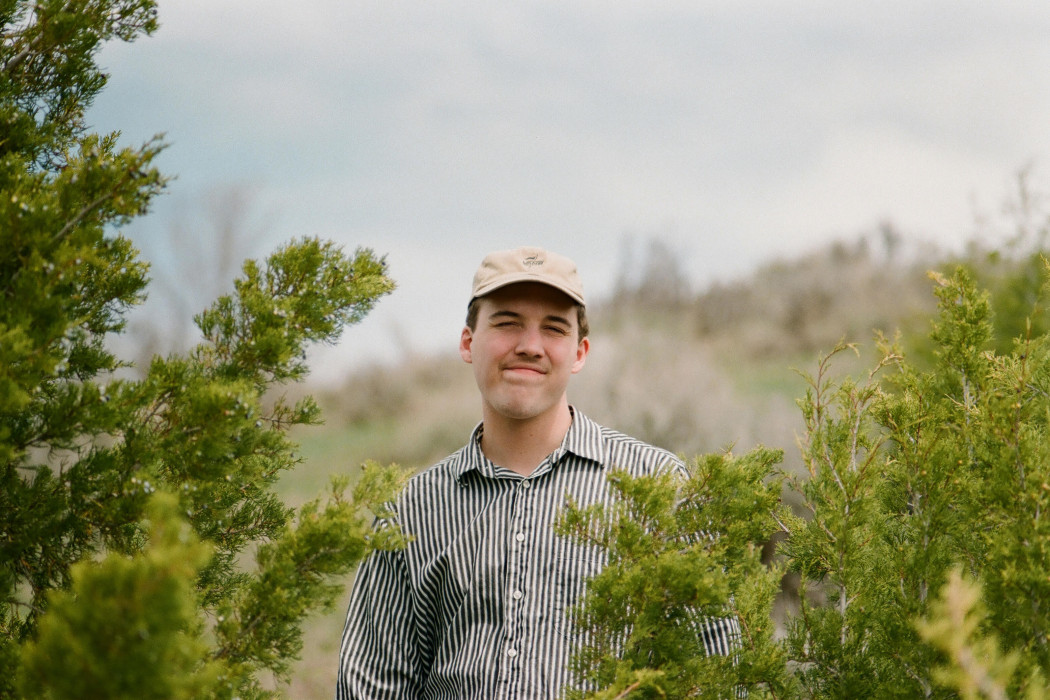 Ritt Momney is the solo project of 19-year-old Salt Lake City native Jack Rutter. We had a virtual interview with Rutter, and we learned about the life events that shaped his first album and how he’s coping during COVID-19. Listen to his latest single, “Put Your Records On,” which is available on all platforms now.

WQHS: So first off, I wanna start from the very beginning. How did you discover your passion for music and who are some artists that you associate with growing up?

Ritt Momney: Let’s see. My dad was never super into music, but my mom, she played a lot of Ingrid Michaelson and some 2000s pop kind of stuff. One band that she would play sometimes that I rediscovered later on was Margo & the Nuclear So and So’s. I like them a lot. I guess during my childhood I would listen to music, but I didn’t really care about it. I think towards the beginning of high school I found James Blake. That was definitely one of the first artists that I found that inspired me to make my own music. His self-titled album is one of my top three favorite albums probably. STRFKR is another one. Those aren’t really my childhood, but kind of mid-teens. That was kind of when I started getting into making my own music.

WQHS: Very cool. STRFKR’s Reptilians poster has been up on my wall since high school. So fast forward to your high school experience. How was Ritt Momney created and how did you end up with a name so closely associated with Mitt Romney? You must get that question all the time.

RM: I had a few friends in my friend group who had all started making music earlier, they all sang a little bit and played instruments. So everybody just picked an instrument and we started jamming a little bit. And we did that a little bit on and off for a few years and then during those few years I started trying to figure out how to produce. And I started kind of trying to write and kind of started learning how to play the piano and guitar. And then junior year of high school, I think, was when we were like, “Yeah, that’d be cool to like actually try to do something.” And someone was like, “Oh what if it was Ritt Momney like Mitt Romney except the first two letters are switched around?” And I was like “Okay.” And yeah, if we had known that I would actually be a real thing, then we probably would have put some more thought into it. Yeah, I guess you just kind of have to own it. It kind of means its own thing for people who are actually fans. They probably aren’t thinking of Mitt Romney every time they hear it. But yeah, I do get roasted on Reddit sometimes.

So, it’s just me and those friends, we went into a studio and paid some guy to record and produce “Young Adult” and “Probably!” and “Theater Kid.” And they turned out well. I definitely wasn’t a good producer at that point. So, I actually produced Golden Slumbers, which was the little three song EP with “Probably!” and “Theater Kid.” And you can hear that I wasn’t a very good producer at that point. So I’m glad I didn’t produce that stuff, but like I always thought, “I’m gonna try to get good at producing so I can produce my own stuff exactly how I want it instead of having to give up so much creative power to some random producer that we don’t even know.”

So a little bit after that, most of the people in the band went on some missions and my girlfriend at the time went to BYU’s campus in Hawaii. The drummer was still there but basically everybody was like, “Yeah well, we might do something when they get back. But like, who knows?” And then through all that time, I was putting stuff on my personal SoundCloud and trying to get better at producing.

So the girl who went to Hawaii, we kind of were on and off of good terms. And when we were on good terms me, her dad, and her sister booked a trip to Hawaii to go visit her because I was pretty close with her family too. And then we weren’t on good terms. So that was the worst thing ever. And Mac DeMarco was playing in Hawaii and we went to that concert. Then I was like, “I’m going to go home and I’m going to get super famous and then I’m going to come to Hawaii and play a show and then she’s gonna love me again.” And I tried to do that by releasing “Something, in General” and it worked on a very small scale. But not quite Mac Demarco level yet. Genuinely the main motivation for a while was getting her attention. And because at that point “Young Adult” had been put on some Discover Weeklys and it had like a little bit of traction, I thought “Here’s like a platform that I have that I could use.” Then “Something, in General” started doing pretty well and the motivation slowly became more like, “Okay, now I just want to get famous, not just for her,” which was a problem in and of itself.

WQHS: Very cool. Well, it sounds like your friends were really influential towards the creation of Ritt Momney, and I know Her and All of My Friends revolved around the loss that accompanied the departure of your friends and your girlfriend at the time after high school. So what do you think will be the inspiration for your future work other than the fame, as you’ve mentioned? Now that you’ve released those emotions and thoughts into the world, what do you think’s next?

RM: That’s a really good question. I’m still figuring that out. I’ve been writing music but I’m not really sure. One thing is that I’m doing pretty well generally, I haven’t been really sad for a while, which has been somewhat detrimental to my music. But I’m sure I’ll just end up writing about what is most relevant in my life, which right now is grappling with really wanting everybody’s attention and all the pressure to capitalize on the success of Her and All of My Friends. And feeling like I need to make a song that different enough so that I’m still indie, but still accessible so everybody listens to it. I think it would be helpful to work all those feelings out into songs, because a big part of getting over that girl and dealing with religion was writing stuff out in diary form and being able to listen back to it and understand what I was thinking. So yeah, right now it’s just music and this lifestyle.

WQHS: Yeah, sounds like there’s a lot of external pressures in your life right now. I guess we’ll just have to wait and see how this situation turns into some songs. Switching gears now to present day, I know your tour with Dayglow is canceled. I was actually going to go and cover it at Voltage Lounge! Are you planning on rescheduling it after everything settles down?

RM: We aren’t sure. The way that everything is going a lot of stuff has been pushed back to 2021. It’s so up in the air right now that nobody really knows what’s going to happen. Everyone’s tentative about scheduling something at any point, because the quarantine could just extend into that point.

WQHS: Alright, well allegedly all clouds have silver linings tucked away in them somewhere. Has the stay at home order allowed you to create more music or has it been detrimental to your music making process?

RM: I don’t wanna minimize the major problems it’s created for a bunch of other people because it’s a super serious problem. But for me personally, it hasn’t really. It’s really not a bad time to be a solo musician right now. I’ve been with my family in Salt Lake City for the past month. I have a studio set up downstairs. It’s been pretty productive and I spend a bunch of time with my family which has been fun. Yeah, it really it hasn’t been bad for me at all. I’ve kind of enjoyed it, actually. Besides the tour being canceled, which is obviously a huge bummer, I haven’t really had any problems with it.

WQHS: It’s sweet that you get to spend time with your family. You kind of spoke about how it’s a good time to be a solo musician and I was kind of wondering about what your typical creative process looks like when we’re not, you know, under a stay at home order in the midst of a worldwide pandemic?

RM: Yeah, it’s honestly kind of the exact same. Except I live in L.A. now, so either I do it here and then go see my family sometimes upstairs or I do it in L.A. and don’t go up to see my family. One thing I’m missing is working with other artists, which I started doing a little bit of in L.A., and it was fun although it wasn’t my passion or anything. But I’ve been interested in writing pop songs, like some radio songs for Ariana Grande or something. I definitely don’t want that to take over, but just to be set financially because right now it’s really hard with my main source of income being my own music. It’s really hard to be relaxed. It’s hard for the main worry not to be “Okay. So, if I could make this song, that’s really true to what I believe in, but it’s super inaccessible or it’s too weird for some people then I’m not going to be able to pay my rent in like six months.”

So yeah, I miss working with other artists. There’s this very poppy artist named Michl and he invited me to help him out with some of his newest album. He’s been awesome and writing with him was really fun. I was more of a consultant, I guess, but that was fun. As far as my own stuff, I very rarely am comfortable with someone else helping me with my own stuff. I’m trying to get past that because I think it’s just an ego thing. So it really hasn’t changed much about like my own creative process.

WQHS: Cool. Well, I hope that you can get back to collaborating with artists in L.A. My final question is: what artists have you been listening to during quarantine?

RM: Zack Villere. I like his newest album a lot. I’ve been listening to the Pollen playlist. I haven’t really gotten super into anything. I made like a quarantine playlist, just like everybody else did. That was just a bunch of songs that I’ve been listening to, but I really miss the feeling of just finding a new artist and being super excited about it and just listening to them all the time. So hopefully that happens again soon.

WQHS: Fingers crossed you fall in love with another artist any day now.