Skip to content
HomeArtist Feature A Chat with John Moreland 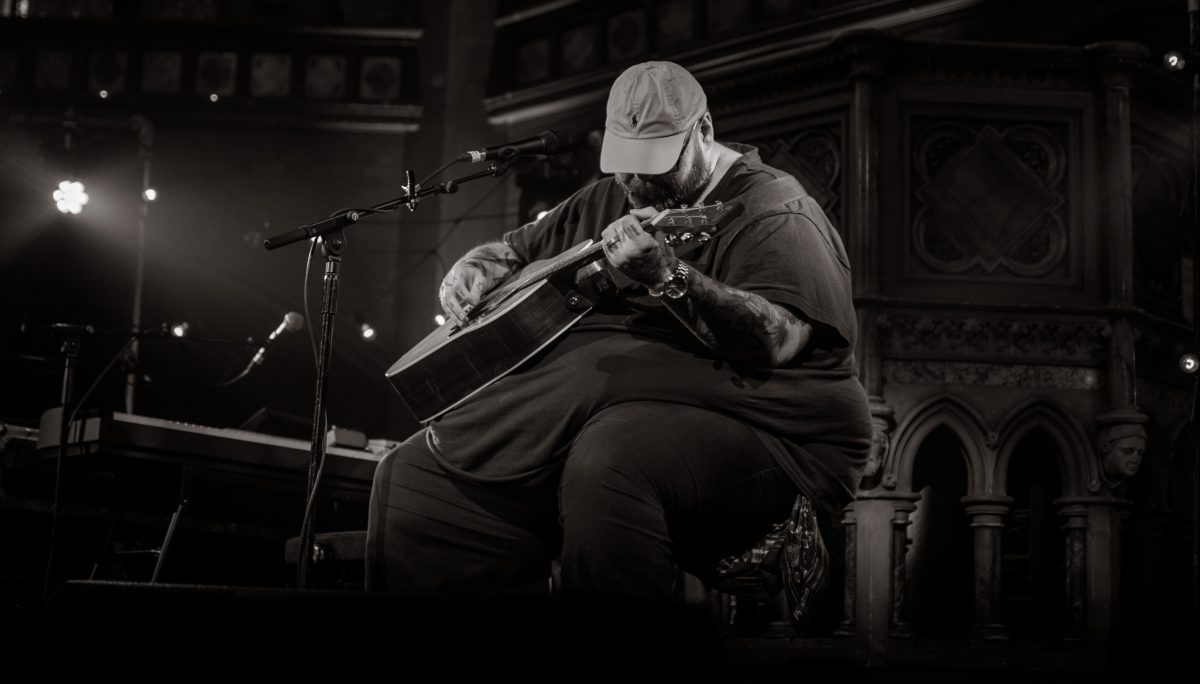 WQHS sat down with John Moreland before his Union Chapel show in London to chat about his latest album, Big Bad Luv, his writing style, Oklahoma, and the saga of the “Big Bad Luv” neon sign.

WQHS: How is this album different- in terms of how you wrote it- from the last album?

John Moreland: The only difference in how I wrote it is I knew I would be writing for the band on this album, whereas for the last couple records before this one I was playing all the instruments myself. This one I had a true band- particularly a rhythm section, a drummer and a bass player, so I wrote with grooves in mind a lot more. As far as recording it, it was different because I had the band this time. Instead of spending a whole day building up one song by myself, I just went in with the band and played it once and we were done. That was wildly different. It almost felt like cheating, it was too easy.

WQHS: Do you write on your own even for tracks with a full band?

JM: In the past when I’ve had more regular bands I could spend time with and rehearse with them more, other people’s ideas would make it into the songs more. I would still come with the full song but maybe the drummer would play a fill that would turn into part of the song or something. The band I have now, I don’t get to play with very often so the songs were pretty complete when I brought them to everybody.

WQHS: Do you prefer playing with a band?

JM: I like both. Whatever I’ve been doing for a while… I wanna do the other thing. The grass is always greener. After I’ve been playing solo for a while I’m dying to play with other dudes. After that, it’s nice to play these solo shows. On this tour they’ve been really enjoyable cause I haven’t done any solo playing for a few months.

WQHS: Do you have any specific live moments that stand out?

JM: Right before we came over here, we played in Charleston, South Carolina at the Highwater Festival and it was probably the most memorable festival set I’ve ever had. They gave us the perfect time slot so the sun went down during our set, it was right on the water, the temperature was perfect, and there was a really cool and respectful audience. Usually playing outside at festivals isn’t my favorite but that one was really enjoyable.

WQHS: Do you have a big fan base in Oklahoma?

JM: I haven’t played there very frequently for the past couple years, but last time I played there in Tulsa it was a sold out show, so that was cool. Oklahoma was kind of the last place to sort of catch on to what I was doing, not anything against them, but it’s the case for a lot of people with their hometown. You can get taken for granted cause you’re there all the time and you’re playing all the time and they can see you whenever. Then you go away for a while and they get a chance to miss you, or you get recognition from other places and they realize, “oh, that guy is cool, hey, he’s from here”. A couple years ago I was touring full time and I would play to big crowds in a lot of places and I would go back to Oklahoma and play to like 15 people but now it’s finally caught up.

I have friends in bands who have said the same thing- I think there’s certain people who play in their local scene and are revered there and get a lot of local press and stuff, but if they go anywhere outside of 100 miles outside of their hometown nobody has any idea who they are, so I think I was always conscious of that, and I didn’t want to fall into that trap. I never placed much importance in being accepted in my hometown, I was more concerned with touring and building an actual career.

WQHS: Aren’t a lot of your songs about Oklahoma though or at least reference it?

JM: Maybe it creeps in there but it’s not something I ever think about it. The way it does affect my music in a bigger way is just the fact of not living in Nashville or LA. I like not being in a music industry bubble- I can go to those places for career stuff and I enjoy my time there but it’s nice to go back to a real place where people don’t care what number you are on the Americana charts. I think that directly affects my songwriting.

WQHS: What inspires you to write stuff?

JM: It’s just like an itch that I need to scratch. The thing that usually makes me sit down and write is just the fact that I haven’t written in a while. It’s not like I’m always scanning and taking stock of every situation trying to wring a song out of it. It’s not like something happens and I think, “oh that’s a song”, but when I haven’t written in a while I just start to feel bunged up, like I really need to do it and then I’ll feel better. That’s how I’ve been my whole life. Everybody has that outlet in some way or another and songwriting is mine.

WQHS: How much do you write?

JM: I used to write 40-50 songs a year, but now I write maybe 10 or 12. I’m touring a lot more and I’m not very good at writing on tour, that’s something I’m constantly trying to get better at. Just getting older, it just comes slower. Creativity has to be more of a priority when you’re older. It’s not as natural anymore. It’s something I really have to do on purpose, I can’t just rely on letting it happen or else it won’t happen.

WQHS: Have your songs gotten calmer as you get older?

JM: I think I fluctuate back and forth. I go through periods. When I was younger, I thought of myself as a calm easygoing person and then I went through this phase where I just wanted to set the world on fire, kind of rage-y- not in a bad way, but just having this fire burning inside me or something, and then I got real calm again, and now I feel myself getting kind of rage-y again, so I guess that’s just life. It comes in waves.

WQHS: Do you think you’ll ever change your style of music you write?

JM: I’ve thought recently like I would like to do something wildly different. I don’t feel like I’ve done the exact same thing- every record is different, but it’s all been under the same umbrella. I’ve been feeling like I want to do something totally out of left field, but then when I try to do that it’s not very satisfying. I don’t find satisfaction in doing something weird or different for the hell of it- it’s gotta be sincere and true. I’m totally open to doing something stylistically very different from anything I’ve ever done but I don’t know, I think I’m just going to do whatever feels right and feels sincere and resonates with me.

WQHS: Do you have a favorite track off the album?

JM: I have a couple that have been my favorites- the one that I like the best lyrically is “Lies I Chose to Believe”, and “Ain’t We Gold” has become musically my favorite because at first I didn’t think that one was that cool- I mean I liked it enough to bring It to the band, but I wasn’t counting on it making the record. When I showed it to the band and everyone did their thing it turned into something I wasn’t expecting and it was really good.

WQHS: How did you choose the album artwork?

JM: All the photos were taken by my friend Matt White. My wife did the art direction and the layout and we had this idea about a neon sign that says “Big Bad Luv” because one of the songs has a line about that, and we got a neon sign that has a heart and says “Big Bad Luv”. We were going to have Matt White take photos of this sign in a bunch of crazy places like next to a dumpster or in the middle of the woods, just wherever, and we brought the sign to Matt so he could spend a couple days shooting it. But every time he tried to move it, it broke. He broke the neon sign like 5 times. We were coming up on a deadline so he gave us all his photos to look through and we found these photos we liked, so that’s what we did. We still have the sign, we got it repaired, and I think we’ll use it as a stage prop or something. I love the photo we ended up using on the cover a lot more than anything we could have done.

John Moreland plays the Bowery Ballroom in New York on June 7. All photos from John Moreland’s Union Chapel show on May 8, words and photos by Abi Raymaker. You can view more of her work at www.abiraymaker.com