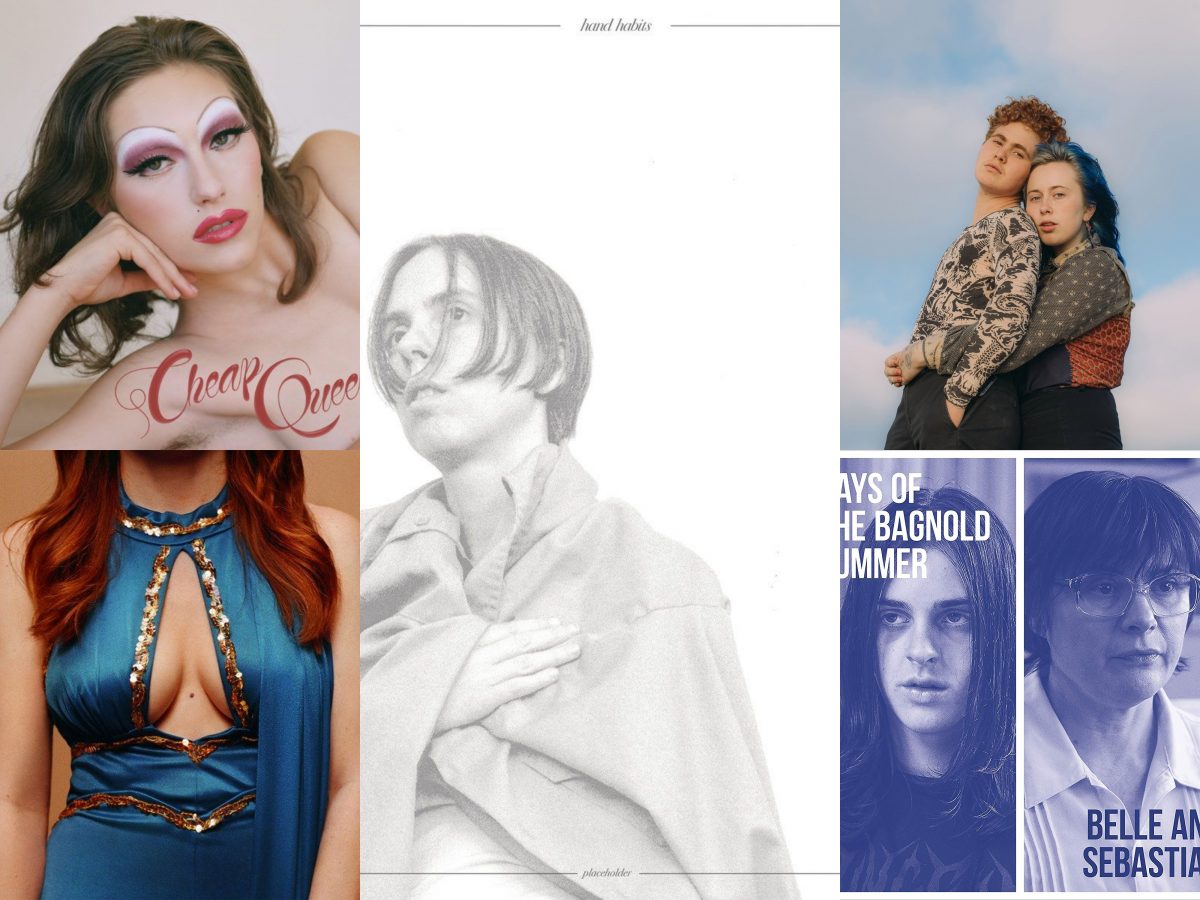 From Harry Styles’ recent Fine Line to Lizzo’s breakout album Cuz I Love You, 2019 witnessed both mainstream artists redefining familiar sounds and newer talents entering the scene. Here are five releases this year you might have missed:

1. Girlpool: What Chaos Is Imaginary

A continuing departure from their earliest sounds, What Chaos Is Imaginary creates a blend of the heavy and the soft, packed noisy distortion with hypnotic, drifting melodies — though no instrumental addition ever feels gratuitous, nor are the songs ever burdened by its various elements. Many of the tracks began as acoustic versions released on Tucker’s and Tividad’s Bandcamp pages in 2017 and 2018, respectively (the former has since been taken down), making this album a fascinating amalgamation of sounds. With all its diversity and richness, it somehow never loses focus, culminating in what I find to be Girlpool’s most compelling release to date.

“Stale Device,” the second track of the album, is smooth-sailing but never boring, showcasing the duo’s ability to create mesmerizing harmonies and a darkly surreal quality, accompanied by dreamlike imagery like “packing peanuts at the side of the road.” Later, Tucker’s electric vocals carry us through “Hire,” a track with a retro, 90s flair, accentuated by a springy piano that is at once captivating and not too overbearing, while “What Chaos Is Imaginary” sends us into an ethereal realm with a beautiful orchestral sound. Never falling into complete abstraction, Girlpool do not shy away from the glimpses of vulnerabilities that made us fall in love with them in the first place either, with lines like “Trying to understand what this sadness means” and “I hate the way I feel confused/ like I’ll always be a part of you” (“Pretty”).

With sweeter tracks like “All Blacked Out” and lyrics like “Watch you lay your head / sitting on bricks in Philadelphia / taking another walk,” What Chaos Is Imaginary feels exactly like the imaginary world you enter into as you lie down on the grass and gaze at the clouds, safely carried, if for a mere hour, into a different kind of reality.

2. Jenny Lewis: On the Line

It’s not far-fetched to say that Jenny Lewis never disappoints. Having sporadically released full-length albums since solidifying her identity as a solo artist, she makes the wait worth it every time. On the Line, unlike Lewis’s earlier works, is a more piano-laden set, highlighting her powerful vocals. “Heads Gonna Roll,” the first track in the album, evokes the imagery of curtains opening up on a stage, or the last tune a bar plays at closing time, brimming with a dramatic edge that doesn’t spill over. Lewis is an expert at blending the private with the public, simultaneously offering intimate details and exclaiming relatable axioms: from the “narcoleptic poet from Duluth” with whom she “disagreed about everything / from Elliot Smith to Grenadine” to lines like “maybe / a little bit of hooking up / is good for the soul” (“Heads Gonna Roll”).

“Red Bull & Hennessy” is perhaps the most intoxicating of the tracks, with imploring lines like “Don’t you wanna kiss me? Don’t you wanna even try?” and a simple yet catchy melody underscored by energizing drum kicks. On the other hand, tracks like “Do Si Do” utilize three recurring notes to make for a surprisingly gripping tune; it makes you want throw your hands up and sway to the rhythm. Indeed, the album feels at once like dancing in an elegant ballroom and toasting to a crowd at a bar midnight. And even in slower songs like “Dogwood” that express bittersweet defeat, Lewis never surrenders, her presence felt as a “…heart beating / on the line” (“On the Line”).

Having made her debut television appearance last month, King Princess is slowly gaining international traction, now set to open for Harry Styles’s European tour. ( Jenny Lewis, incidentally, is opening for him in the US). Cheap Queen, Straus’s debut album, very much mirrors her on-stage personality: lively, unreserved, not holding anything back. With lines like “I can make grown man cry” (“Cheap Queen”) and “Ain’t I the best you had?” (“Hit the Back”), Straus lives up to her moniker of both “King” and “Princess.” At various points, however, she makes us wonder how much of what we see is a performance, and how much of her more vulnerable self is allowed the spotlight. With lines like “I get too tough on myself / Sitting alone making fun of myself” (“Touch on Myself”) and “Being chill, being chill with you” followed by the admission that “I ain’t chill at all” (“Ain’t Together”), the album carefully balances the performative and the real, as each track’s video loop on Spotify shows Straus enacting a different persona, until at last in “If You Think It’s Love” we see her removing her makeup — and similarly what emerges in Cheap Queen is not a picture of cheap honesty, but earned sincerity.

“Homegirl,” among the most moving tracks on the album, portrays the narrative of hiding a queer romance (“We’re friends at the party I’ll give you my body at home”) paired with a stripped-down acoustic sound. Many of her songs achieve depth through simple acoustic accompaniments, meanwhile tracks like “Useless Phrases” and “Do You Wanna See Me Crying?” demonstrate her production prowess, and rock-infused “Prophet” shows her musical breadth. Never falling into easy or cliché techniques, Straus sways at the edge of pop without compromising originality.

In Cheap Queen, we witness Straus at her most profound, hearing her articulate those private thoughts with maturity and weight. A line as seemingly paradoxical as “It ain’t clear how we feel when we spend all this time with each other” is understood, and earlier “I’m still trying to draw all the lines through my friends and my lovers” (“Isabel’s Moment”) is deeply felt. At only twenty-one years old, Straus has a promising career ahead of her, and I can’t wait to see what comes next.

placeholder, Hand Habits’ second full-length album, is a captivating blend of indie folk and rock, with smooth, transient notes sliding in and out of view amid soulful guitar backdrops. Duffy’s vocals are at once full of longing and bittersweet without being swallowed up by the sadness. “can’t calm down” is driven by a powerful bass line and later by a mixture of harmonized melody lines and vocals layered on top of one another, while a haunting guitar line cuts in later, rounding out a rich, continuously evolving song. With lines like “When I get to thinking / I start to worry that you don’t know me anymore,” which open “jessica,” accompanied by gliding, bluesy guitar notes, Duffy narrates love matter-of-factly, where “I’ve seen the deepest part of you / So I can’t act as though my voice can reach you now” (“jessica”), creating an atmosphere of gravity befitting the topics they sing of.

“the book on how to change part II,” the closing track on the album, feels like a phone call from far away, drifting in and out of an acute sense of loss (“I thought I heard your voice / It was just the TV screen”). Singing, “Waking from the deepest sleep / a difference between life and dream,” Duffy has created songs that feel just a touch away from reality, like being in limbo or wading through a state of confusion, where the significant thoughts are heard the most clearly.

5. Belle and Sebastian: Days of the Bagnold Summer

Released as a soundtrack for the eponymous film Days of the Bagnold Summer and including two tracks that had been previously released (“I Know Where the Summer Goes” and “Get Me Away From Here I’m Dying”), this album shows Belle and Sebastian at their most charming: tinged with sweetness and gentle beats, the fourth track “Jill Pole” opens with a clarity and brightness that reminds one of a summer breeze, while “I’ll Keep It Inside” paints the scene of a young, secretive love, where all the excitement, uncertainty and doubt are transformed into a bare, ballad-like tune. “Sister Buddha,” on the other hand, follows the upbeat trajectory of their 2018 album, a blaring, triumphant track that punctuates the repertoire with energy.

Belle and Sebastian’s latest release may not be their best or most cohesive, but it embraces their sentimentality without being excessive, gracing us with both heartwarming lines like “All I want for you is joy and peaceful love / Who you get it from is not my main concern” (“This Letter”) and contemplative ones like “You won’t find your peace in a perfect home / And the perfect man has a crack” (“Did The Day Go Just Like You Wanted?”). Like a welcomed respite after a long journey, Days of the Bagnold Summer stays true to the band’s romantic style, just as these lines do:

And the dreams that you try to find

When you close your eyes when the world is silent

Give yourself to a mystery

Open up to warm possibility

You are blessed, not ragged, not lost

As long as you love (“Did The Day Go Just Like You Wanted?”)