WQHS Goes to Made in America: Day 2

I started Day 2 in the mid-afternoon with a visit to the Freedom Stage for Channel Tres. In my four years of attending the festival, this was the only stage at which I had never seen a set. The stage is usually reserved for electronic artists, since it has a robust set up for heavy bass. These are never usually the artists at the top of my list. I’m glad I did get to catch Channel Tres’s set, though. It made sense that it was at the Freedom Stage. The bass pounded me to my core as I shot from the press pit. He came out on stage flanked by two male backup dancers, which I was certainly not expecting. I greatly enjoyed the choreography from the three of them and thought the whole thing added to the performance. It was an infectiously danceable experience. Although the crowd was small at the start of the set, the stage quickly amassed more people, as the bass boomed throughout the festival.

I then headed over to the Tidal Stage for my most anticipated set of the day—Megan Thee Stallion. Despite her enormous following, the festival organizers decided to have her and DaBaby (who came on right after) perform at the smallest stage. The crowd was larger at their sets than any I had ever seen at this stage. It soon became overwhelming for many in the crowd, and the guards were unable to maintain control. It didn’t help that she came 30 minutes late to a 45 minute set. However, none of this mattered once she did come out. A truly iconic figure, she gave a memorable performance. Those in the crowd who were able to withstand the heat and the claustrophobia were treated to a worthwhile experience. The crowd rapped and sang along to each song. In short, it was a very fitting end to Hot Girl Summer.

Next came DaBaby, for whom the crowd also went wild. He brought a lot of energy to the stage, which was easily matched by his devoted fans. Again, people knew all the words to his songs. At one point, at his encouragement, people started to jump the barricades and rush the stage. Although a hassle for security, it further proved just how dedicated his fans are. The most exciting moments in his set, however, were when he brought Megan Thee Stallion back out to sing their song, “Cash Shit,” and Lizzo out to sing their remix of “Truth Hurts.” He and Megan both were featured on this year’s list of XXL Freshmen, a fitting honor for both of them. They’re two of the most exciting and innovative rappers in the game, and I feel very lucky that I got to see both of them perform.

After DaBaby came yet another XXL 2019 Freshman, Tierra Whack. This set for me was nostalgic and personal, because she was one of the first artists I brought to Penn as a Jazz & Grooves director and the first show I organized that sold out. It’s been remarkable to watch her rise to fame this past year, and she deserves every bit of it. She’s one of the most talented artists and rappers out there right now. She accented her set with her signature sense of humor and bizarre style. Her outfit seemed to be some sort of green Power Rangers suit that was covered in light-up fidget spinners. Only she could think of that and only she could pull that off. Her set also featured some interesting futuristic animated background graphics that were simultaneously reminiscent of Dr. Seuss, Ex-Machina, and a brightly-colored nightmare. She played all of her breakout album, Whack World, as well as some of the singles she’s released in the past year. It was a great way to end the night and a great way to end my festival experience. 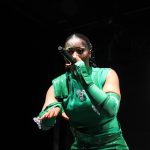 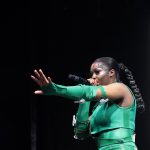 I specifically chose to focus on artists that have had breakout years and I’m glad I stuck to that. Made in America has always done an excellent job at showcasing young and exciting new talent, and this year was no different. Rather than be stuck in a crowd with thousands upon thousands, barely able to see a tiny person on a stage city blocks away, I’ve found that the more intimate sets are the most rewarding. It’s so much easier for performers to connect with their audience when you can actually share a moment together. That human connection to me is what concerts are all about. I’m happy Made in America has provided that for me for the past four years. It’s become something of a tradition, and it’s definitely something I’ll miss next year when Labor Day Weekend comes around.