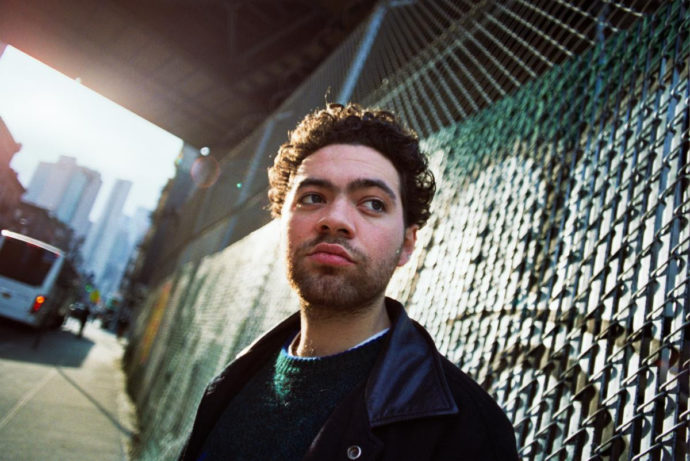 “Y’all ain’t seen my downfall yet”

Six years since Ratking took up the reigns of New York hip hop with So It Goes, Wiki is still rapping his ass off. Promoting his first album since leaving XL and going independent, he made his stop in Philly up in Fishtown at the cozy, yet spacious, Kung Fu Necktie.

The show opened up with Philly local, Maddogg, who with his grunted vocal performance gave a bass and noise-heavy set backed by his DJ and live drums. Then came Wiki’s friend and collaborator, Mr. Motherfuckin Exquire. The Exquire had bars for days and almost as many jokes, top it all off with underground jazz rap homages in his instrumentals.

Before Wiki (Patrick Morales by birth) took the stage, longtime friend and DJ, Sammy, got to spinning. Talented and fun DJ, grooving tastefully behind the tables (crucial trait for a good DJ IMHO), highlight being a dance hall remix of Jamie Foxx’s “Blame It” and Shigeo Sekito ‘s “The World II.”

The Leppy Coqui pops out, draped in the Irish flag (half of his identity along with Boricua). It’s clear with his intro that it is going to be a dynamic show. Sammy, doubling as a hypeman, has his ad-libs mixed like he’s yelling while falling into an abyss (“YO WIK”), while Wiki gives us his snarling rhymes and, what struck me as a notable part of his performance, his stupidly expressive eyes. That big-ass forehead gave him a whole lotta room to widen his eyes and furrow his eyebrows, increasing his stage presence significantly.

YERRRRR OUT ON THE ROAD AGAIN. Pull up! Catch me with @theblack.genius , @deejayearl in the Chi, @wifigawd in LA @masterpeaceldn in the UK and many more guests along the way! Tickets in the bio! photos by @muhstee from New Years Eve with @manwearinghelmet

No part of the solo discography was left out as he even treated loyal fans with “Wikispeaks,” timeless rhymes he wrote when he was 16-17. He performed other slappers like “Downfall,” “Pesto” from OOFIE; as well as the wonky “Pretty Bull” from his debut solo LP, No Mountains in Manhattan. He even shared what seemed to be unreleased verses or freestyles over the beats of Migos’ “T-Shirt” and Chief Keef’s “Don’t Like.” His debut mixtape Lil Me (which holds quite the special place in my heart) was not exempt. The Ratking producer Sporting Life, and grime legend Skepta collaboration “God Bless Me” had its kalimba sample ringing through my head for days leading up to the show. The live performance came through as well as I hoped; with the pleasant, dreamy instrumental, just to be brought to life with a heavy bass, reeling the crowd in with the uber-catchy flow, coupled with bars on bars.

Then “Grim” came on; the certified dark, southern-inspired, banger with Lil Ugly Mane and Denzel Curry features.
“Thinkin’ you the one, you gon’ end up done
When that Grim Reaper come, could be chillin’ by the pool
Ain’t nowhere to run, man, the sun comin’ up, and
You ain’t gonna be around to see it when it’s full”

I came to the show with the S.O. who is not a fan of moshing but Kung Fu Necktie doesn’t have room for a mosh pit and non-ragers, so I spent the song being a human-shield and shuffling us to the back. A line from Wiki’s “Baby Girl” came to mind: “I’ll cover your head when they throw elbows at the shows”; so given this awareness, Wiki fittingly took a moment to give a quick ~vibecheck~: “I really love and appreciate the energy, but let’s watch out for elbows hitting the shorties. I’m tryna be on some almost R&B shit. Let’s keep that energy going, though.” What an absolutely gracious sweetheart. The crowd had been up to some truly proper head-bobbing until that point, letting the emcee put on the energetic show. A real demonstration of the evolution Wiki has gone through as an artist, given his first touring experience under Ratking was with Death Grips.

A part of this evolution is the slew of singles that have been released since the departure from XL Recordings. Notable ones include his collaboration with Jesse James Solomon and (recent Danny Brown collaborator) Obongjayar; “Elixir,” along with the Madlib-produced “Eggs,” both of which he performed. “Young Hovito he a sensei / I’m Tito Puente mixed with Big Daddy Kane,” Wiki professes on the latter. However, it was the hook that’s proven to be one of his catchiest in recent times:

“Notes, quotes, everything I wrote
The whole scope, the pope, ordinary folk
Could be dead on the dope, head on the boat
Eggs getting scrambled, eggs getting poached
Either way you gonna feel the smoke, stupid
(Wiki got it coming this year)”

Sammy getting off the final line in his best Bad Boy-era, additional-female-vocalist impression.

It was with the references to Wik’s Puerto Rican heritage that cued me to soon pull out my Puerto Rican flag. Once I did; the crowd soon noticed, moved aside, and brought me up to the front where Sammy caught a video of some fans helping me hold the flag up. Never in my life have I met a crowd that wholesome.

The finale was made up of the final two tracks of OOFIE, “Promises” featuring Duendita and “Freaks.” On “Promises,” Wiki recognizes the impactful women in his life, giving them a lovely tribute through his words that are paired with an equally lovely instrumental and serene vocals from the fellow Boricua, Duendita (my companion’s favorite part of the show). The show is closed out with his dedications on “Freaks,” an uptick in tempo and energy to send us off on what feels like a cliffhanger.

After the show, I got the chance to chat with Wik for a bit where he recognized me as the one with the flag and showed his love and appreciation as I did the same. I told him I would be writing about the show and asked if there was anything he wanted readers to know about the tour. “I’ve felt stagnant for the last few years so I was trying to break out of that with this album,” he admitted. “So this tour, I wanted to really focus on making a good set but also just have fun like I’m in my living room.”

He did just that and more with this show. A wonderful set filled with grooving and lightheartedness, grit and aggression, boisterousness and humor, as well as composure and pensiveness. A gracious and loving human-being as well as one of the most impressive emcees of the last decade.

Listen to OOFIE
Get tickets for the OOFIE World Tour