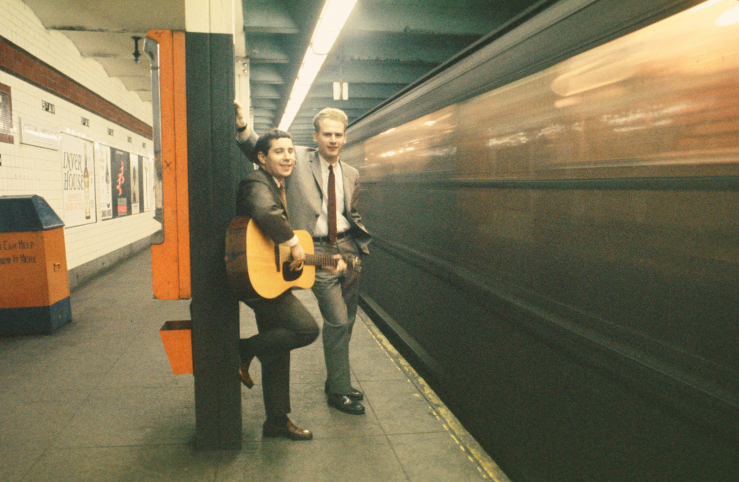 In 1964, you might have been surprised to hear that the teenage folk duo Tom and Jerry were still making music together, under the new name of Simon and Garfunkel. In all likelihood, however, you wouldn’t have heard of them for another two years, when their first big hit under their new name reached the charts with the single “The Sound of Silence”.

By a stroke of genius on the part of their producer Tom Wilson, just when they were about to give up their careers in music, he suggested they give it another shot by re-recording the originally acoustic track as a folk-rock tune. It was an instant hit, and Simon and Garfunkel became household names. Another track, also rebuffed in their sophomore album, fared less well, and today remains one of their most underrated songs.

When Paul Simon played “Wednesday Morning, 3 A.M.” for Art Garfunkel and the label, everybody instantly agreed it should be the title track for their debut. It starts with the dual fingerpicking of two guitars, compressing then relaxing within a few measures before the duo begin to describe the scene: “I can hear the soft breathing of the girl that I love/ As she lies here beside me, asleep with the night.” The song’s narrator depicts a calming vignette, at the day and time of the title, his companion illuminated by the winter moonlight.

In the second verse, it is revealed that what keeps him awake is his anxieties about the coming morning, when he must abandon his lover. Having robbed a liquor store, the singer laments that law enforcement is after him. When the song ends, the narrator’s fate is unknown. We are given only a brief glance into his psyche while he waits for the morning, unable to sleep, and desperately clinging to each moment he can spend with his unsuspecting lover.

Simon casually references the pieces of silver for which Judas betrayed Jesus, hinting at a crime greater than what is literally depicted. He was fascinated with religion at the time, as one can see on the song “Bleecker Street,” where he mentions the same 30 pieces of silver (“Thirty dollars pays your rent on Bleecker Street”). “Wednesday Morning” is an astounding folk tune as well, describing less a narrative and more a snapshot of the mind and scene of the tragic narrator as he fails to find sleep.

The sweetly melancholy track is a perfect closer for the album, expressing the sensation between restless anxiety and serene patience. Its rebirth, however, took a turn for the worse. Sounds of Silence, released in 1966, contained its highly profitable title track as well as a version of “Wednesday Morning,” now rebranded as “Somewhere They Can’t Find Me.” In a vain attempt to pass the track off for a new one, the duo rewrote it with a new rhythm and intro which tied it into the following instrumental piece “Anji.”

The song was now a cluster of old and new, containing the original sentiments of abandonment and betrayal, combined with a faux-rebellious flair in the chorus. “I’ve got to creep down the alleyway / Fly down the highway!” The change is best encapsulated in the way the pair deliver the line “Her hair in a fine mist floats on my pillow.” In the original, it’s presented as carefully as the silent observer intends. In the redo, the pair attempt to grab the listener’s attention, wailing “her HAIRRR…!”

The instrumentation is cluttered, flittering between their pop influences and their jazzier side, which works on later tracks “A Most Peculiar Man” and “I Am A Rock,” less so on “Somewhere They Can’t Find Me.” It is now an absolute train wreck of a track, leaving the tenderness of the original behind and attempting to cash in on a cooler, more debonair sensation that could never work for a couple known for their turtlenecks and vast height-difference.

Cornel Bonca has a biting take on the original version of the song, which he published in his book on Simon, titled Paul Simon: An American Tune: “The song’s a gross miscalculation, and the fact that the duo decided to name the album after it an even greater one.” Later he takes on the redub of the song, stating succinctly, “as cringe-worthy in its recalibrated rock version as it was when it was the terrible folk song ‘Wednesday Morning, 3 A.M.’”

Paul Simon has always been a restless perfectionist. For example, his album In the Blue Light, released earlier this month, is entirely reworked classics from his solo career, redone for various reasons, and apparently his declaration of retirement from songwriting.

It’s not unusual for Simon to take another shot at something that didn’t work the first time around, tracing all the way back to his first serious try at songwriting in the 60s. It worked out in the end, but it was a hectic time for the duo. When presenting the revamped song “Somewhere They Can’t Find Me” in a bar in 1965, the crowd began to giggle, leading Simon instead to play the chords from “Twist and Shout” and feign a bad impression of Bob Dylan.