Made in America: Day 2

This is part two of my coverage of Made in America. This article discusses Sunday, Day 2.

I started the day by heading back to the Skate Stage to catch JPEGMAFIA’s set. I knew some of his music, so I thought I knew what I was getting myself into. I was very, very wrong. He started the set by climbing into the crowd and moshing with the audience, and it kept building from there. By the end, his overalls were torn, sweat dripped down his face, and he was covered in dirt. I’ve never experienced such a high intensity performer like him before. It paid off, too. The crowd had so much fun, even the people who had clearly never heard of him. (I would say, though, that for the smallest stage, JPEG had a disproportionate number of fans who rapped and yelled along to every song.) I feel like it’s become so rare to encounter artists that have that much fun and put so much of themselves into their sets, especially at a festival. JPEG completed exceeded all of my expectations. At the end, he walked along the barrier and shook hands with all of his fans in the front row, further emphasizing how much he cared. I think it was my favorite set of the weekend. 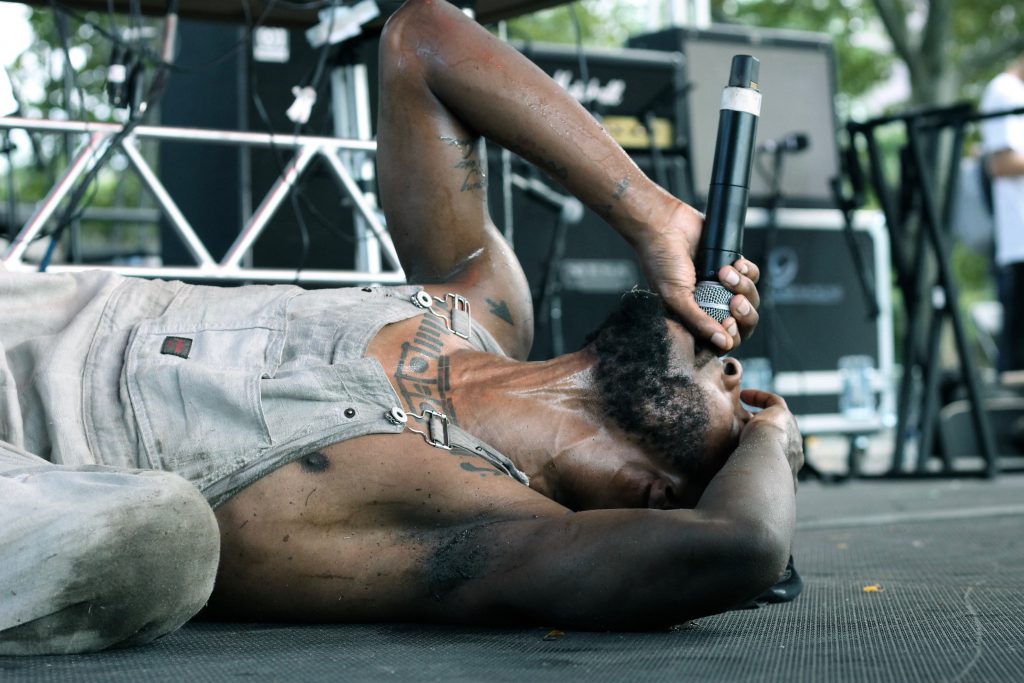 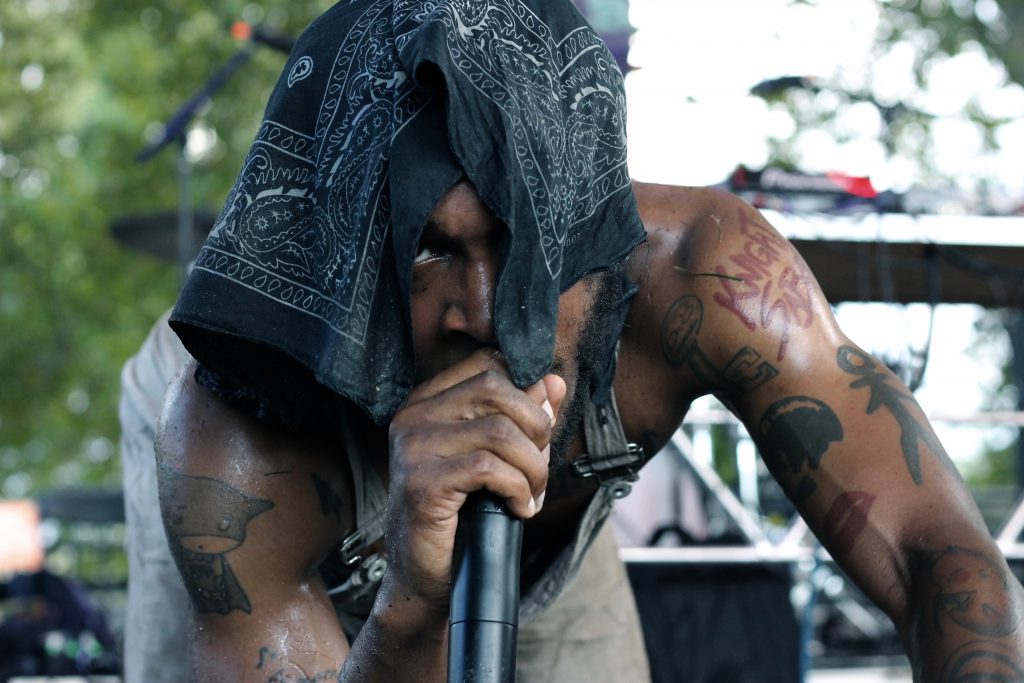 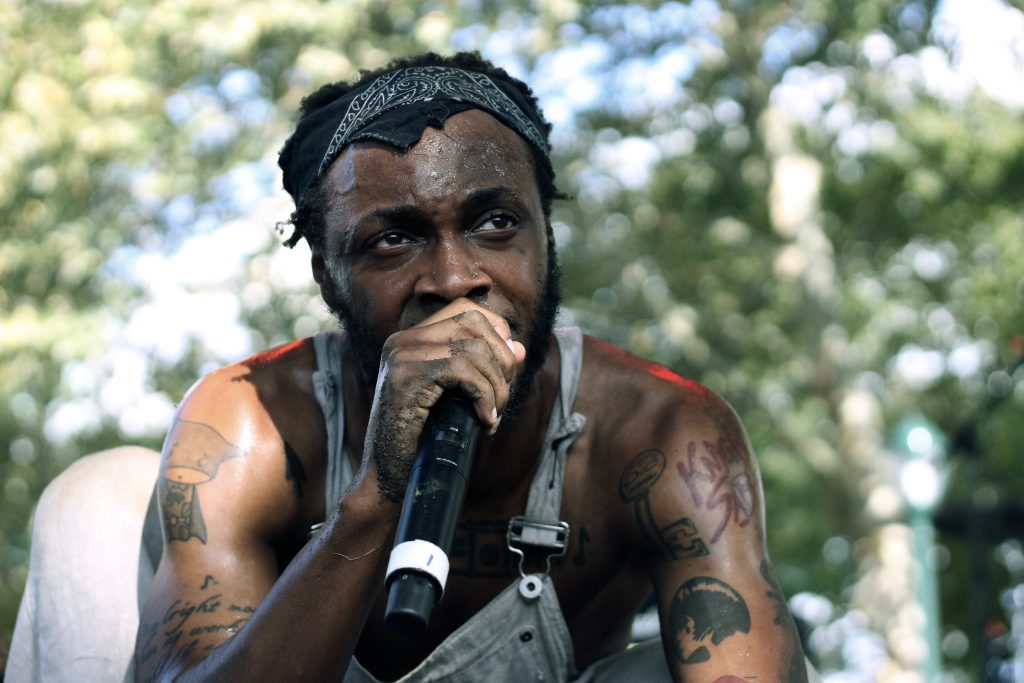 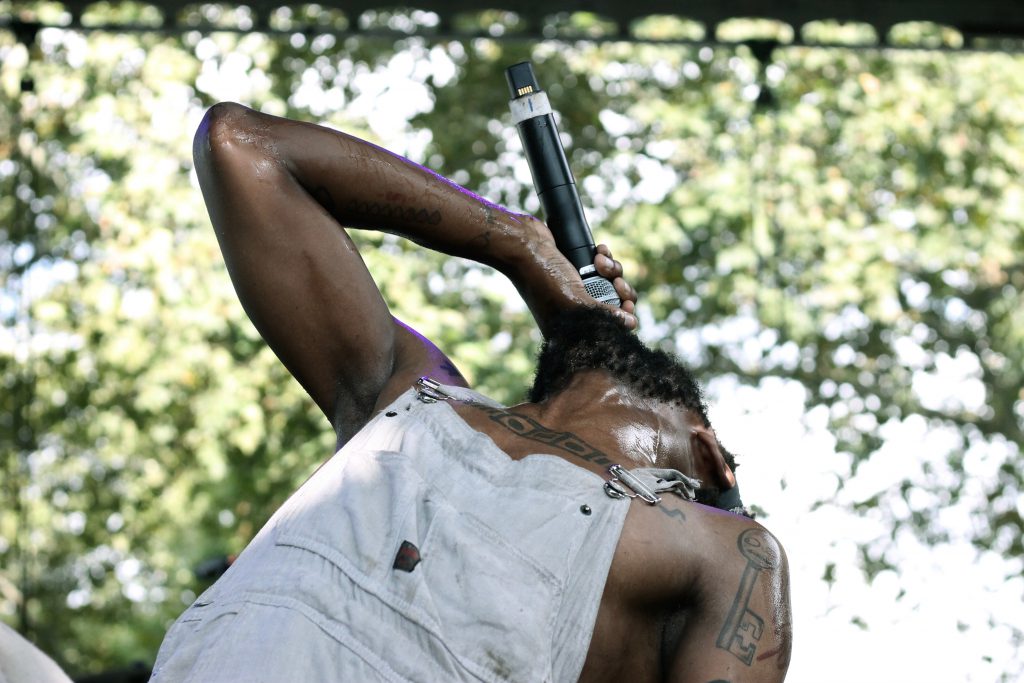 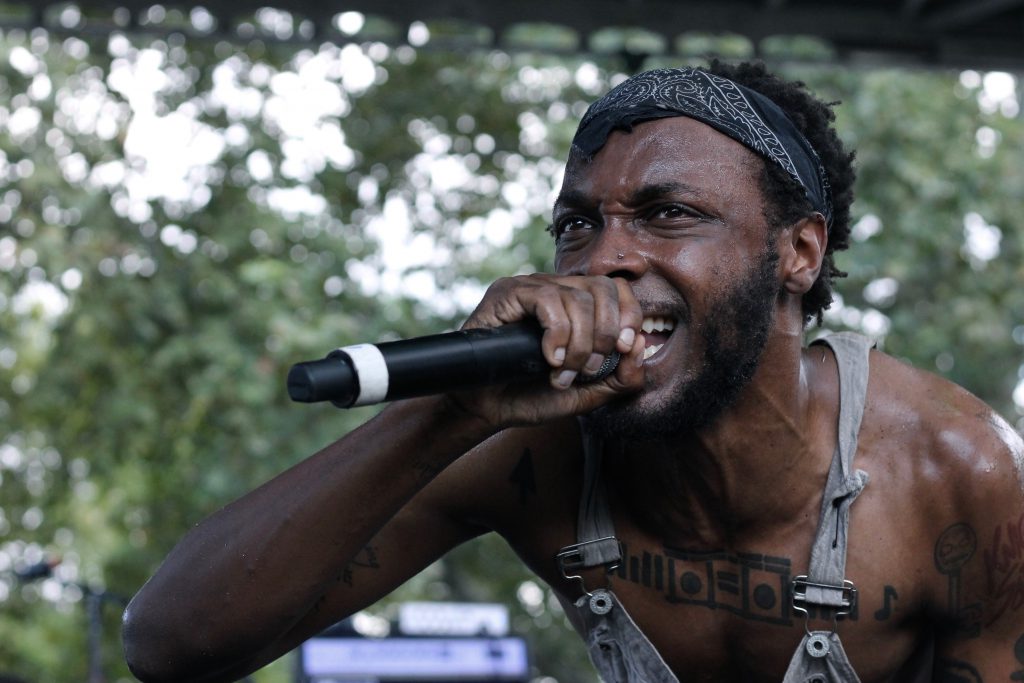 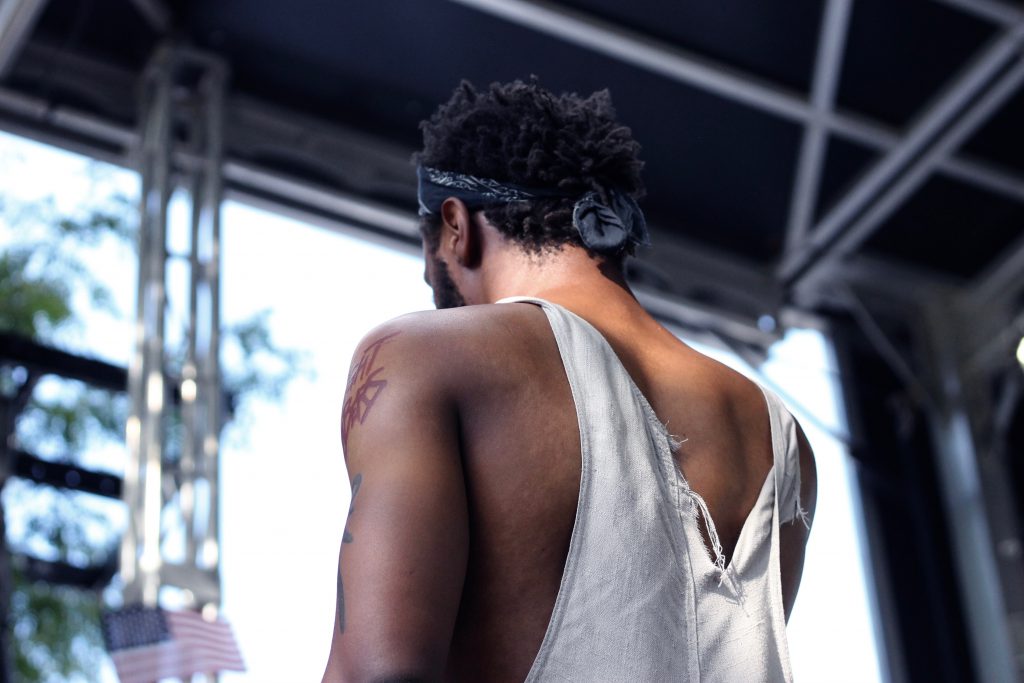 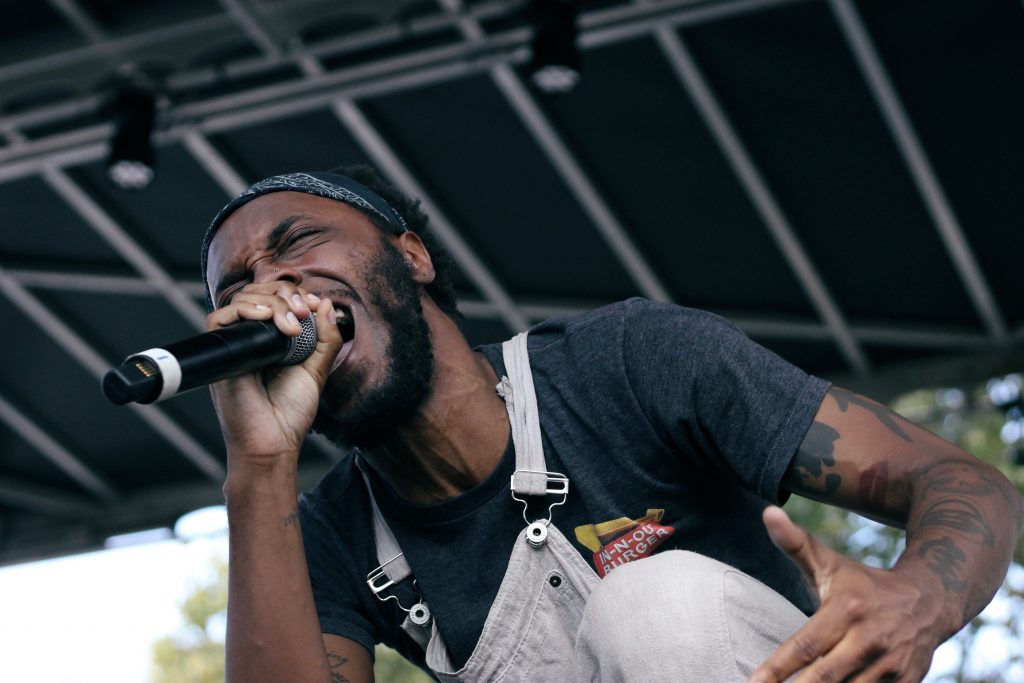 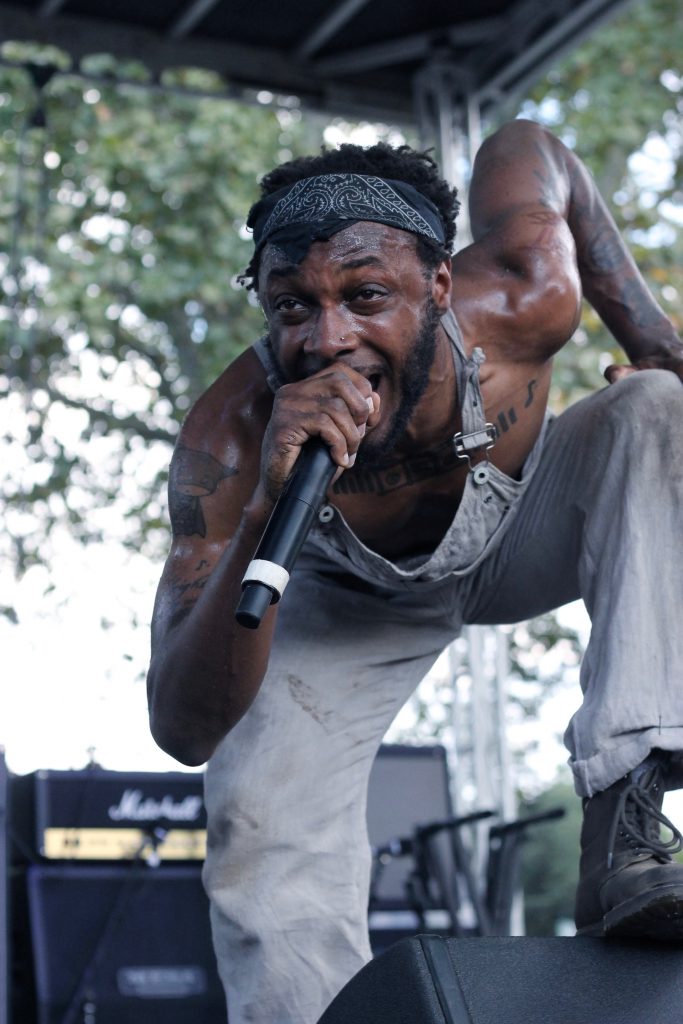 Next, I headed to the Liberty Stage to see Daniel Caesar. I saw his performance at Penn in 2016 and was interested to see how much his performance had changed. Things definitely had. As I waited at the barricade for the set to start, I talked to some girls in the front row who had stayed there all day at the front of the stage to see him. And, as soon as he started playing, they all started crying. Like, the second he started playing. I’ve never seen anything like it. His voice sounds as good live as it does on record — cool and smooth. His live band also sounded great. It was kind of a weird time a day for such a slow and emotional set, but people loved it. Many gathered around the crowd to just sit or dance in their own space and listen. His appeal clearly cut across demographics at the festival, which was cool to see, especially for someone who wasn’t considered a headliner.

The last show of the day I shot was Miguel at the Liberty Stage. I don’t know much of his music but was told by a friend of mine who is a super fan to catch his set. I’m really glad I did. His performance was electric, sensual, and so much fun. It was perfect way to watch the sun go down- it wasn’t too chaotic or boring. He captivated and engaged the crowd. People danced and sang and had a great time. 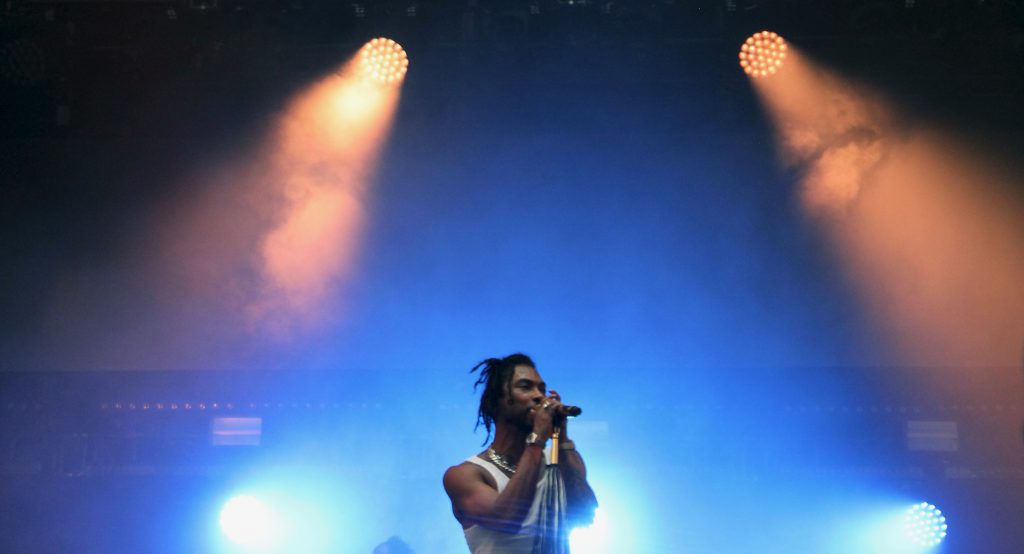 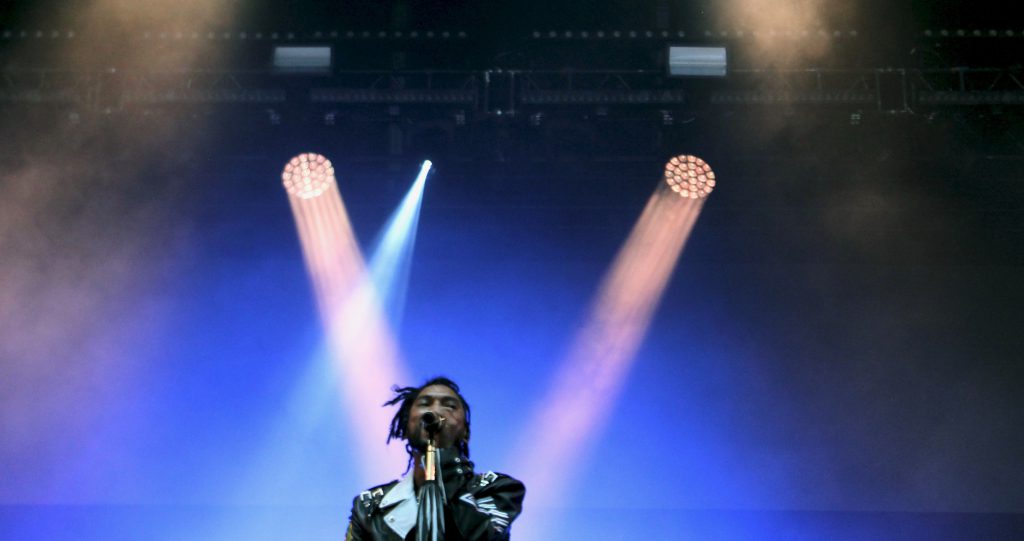 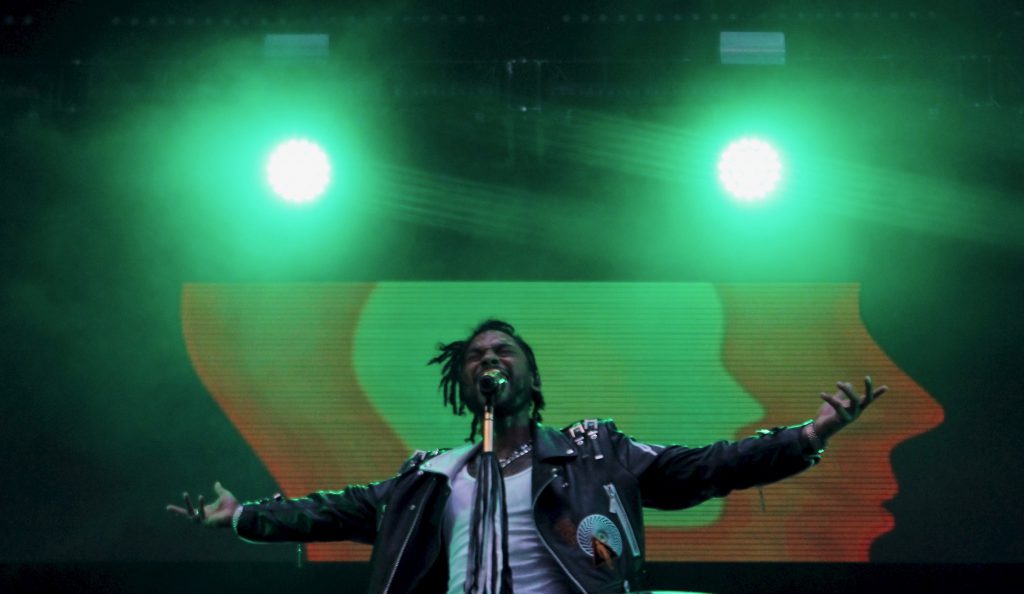 I ended the weekend by watching Kendrick Lamar at the Rocky Stage. He didn’t allow photography of his set, so I was able to experience and enjoy it without worrying about trying to get photos of him. I had never seen him live despite him being my favorite rapper, so I was very excited. It was only a 45-minute set, but he performed a good mix of hits from his earlier albums and the highlights of DAMN. I’m very grateful for getting the opportunity to see him, but I was a little surprised that it was just essentially a DAMN tour show. I thought he would debut at least a new song or two or bring out other members of his label, Top Dawg Entertainment, one of whom was also playing at the festival that day. I shouldn’t get greedy, though. It was a great set, and a great end to the weekend.