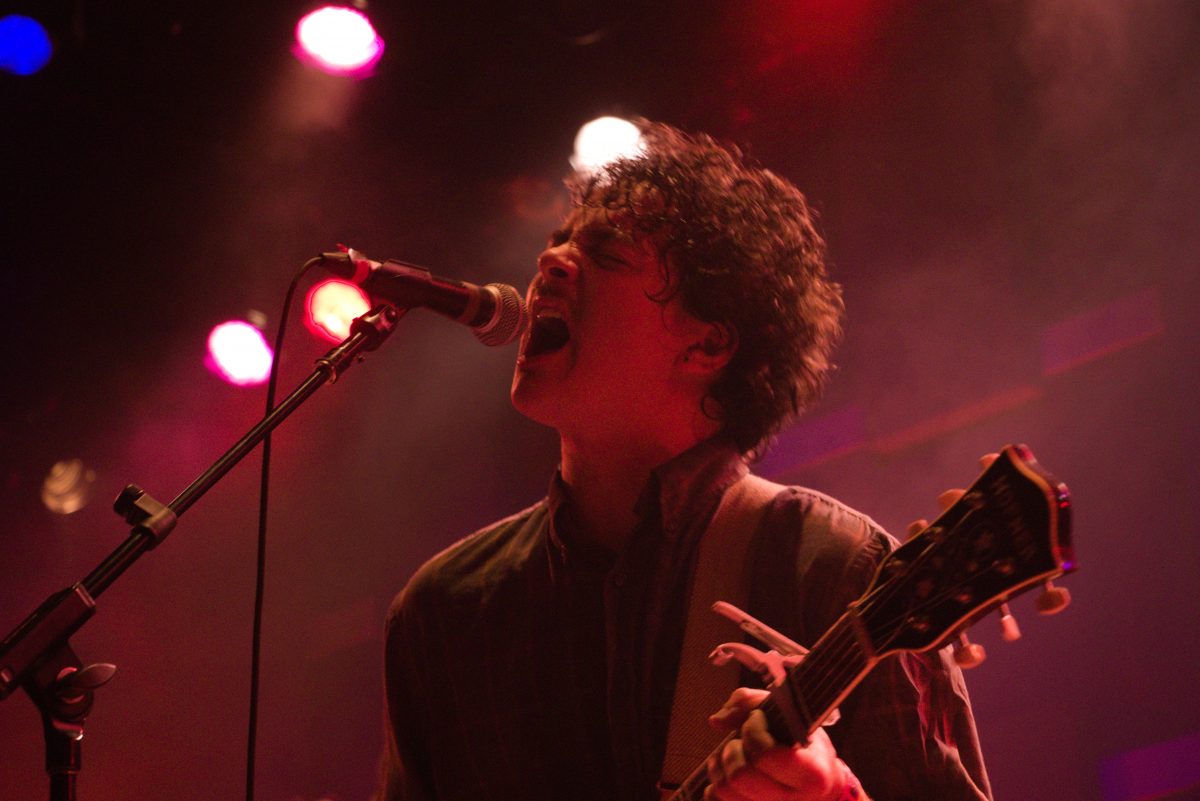 All photos by Madi Hynson.

Last month, a beautiful onslaught of local acts were brought to the Philly Music Festival. A four-day event packed with every rising musical talent in this city, from rap to jazz to alt-rock, this festival was a must-see on all of our calendars. Each act brought their own exuberant energy to the stage, and are all worth keeping a close eye on for the next year, but here’s a short list of our favorites.

Katie Crutchfield of Waxahatchee was by far at the top of my list to see at this festival last weekend. Her 2017 LP Out in the Storm and her EP Great Thunder, which she released in September, are perfect complements to each other. Her musical style and approach are so appealing to fans, especially female ones, who love hard-edged punk songs as much as they appreciate the soft romance of folktales. Great Thunder takes a turn for the latter, while still evoking the guitar-drenched rockers of Out in the Storm with its spitefully sensitive lyrics.

Crutchfield emerged on the main stage alone with an acoustic guitar, playing songs old and new, covers and originals. But while my gaze fixed on her as a great female idol, beer-drunk middle-aged dudes talked over her, laughing obnoxiously at their own self-important conversations. Clearly, this ticked me off – and it hurt Crutchfield too. Before one song, she announced that it would be even quieter than the ones she had been playing already, “so do with that information what you will.” But the boisterous crowd didn’t listen. As she began her final song, she soon interrupted herself to plead with the room to “please be quiet, just for this last one,” with a dejected look on her face that nearly brought me and the other young fans around me to tears. Still graceful, she said a brief thank you after her set ended, but the rude audience behavior decimated what had the potential to be a raw and intimate performance.

This seven-piece beachy rock band is led by an ebullient lead singer in Derek Krzywicki, whose migration from California to Philly has infused this group with a bi-coastal mix of easygoing surf rock and a hard-edged East Coast drive. After playing WXPN’s Free at Noon show earlier that day, the band was still on a high from the crowd’s loving reception of their most recent work, Warmth & Shelter.

The band dripped in the nostalgic 70’s vibe that’s rippling through today’s culture, dressed in deep reds and oranges, some members adorned with layered hippie-esque hairstyles. Krzywicki himself removed his shoes during the performance as he hopped around on and off stage, encouraging the kind of dancing this music was made for. Their set was one of the highest in energy out of the entire festival, and from fans’ begging for a one-song encore, I know I’m not alone in my anticipation to hear even more great music from Secret American.

Opening with her most recent single, “S T R E T C H,” multi-instrumentalist Tiffany Majette, who creates music under the name Orion Sun, led her band in a short 20-minute set. The highlight of her sound is certainly her richly sweet voice, but her skill as a producer is what makes her R&B sound so unique. Contrasting fuzziness with clarity, and layering distinct beats and tracks over one another, her recorded music is pristine, comforting, and cathartically danceable.

Last Saturday, she adapted this electronic-based perfection for a live setting, bringing out the acoustics of a drum kit or a bassline, and sharing the overlapping vocals with a mellifluous backup singer. Dressed in a black jumpsuit and neon green sneakers, Majette bounced around stage with an elation and pride that only performers who are so deeply in love with their music can have. Playing through more originals like “monSTAR” or covers of songs like Frank Ocean’s “Biking,” Orion Sun’s short set left the crowd begging for an overtime encore – which Majette eventually obliged to, a humble smile of gratitude on her face the whole time.

This group sounds like a reincarnation of Black Sabbath, but with a kickass female lead singer. These long-haired wonders had all the basic early metal instruments covered: drums, bass, guitar, and keyboard-organ. But their most captivating element was by far that aforementioned vocalist, Jillian Taylor. Dressed in a red lace jumpsuit with a deep V-neck and chunky heeled boots, she encapsulated the style of a 70’s rocker. Swinging her bleached hair back and forth to the sludgy rhythms surrounding her had the room watching in awe, all of us wishing we could even be a fraction as cool as her someday.

Though the words of the vocals were mostly drowned by the thundering guitar riffs, their hit “Killer” from their 2017 record Planetary Space Child was instantly recognizable, and had the whole crowd headbaning in seconds. The venue and audience may not have been the most ideal for the heavy rock behind Ruby the Hatchet, but the raw talent was nonetheless obvious, and they are not worth missing at their next Philly gig.

This foursome has one of the most unique sounds to come out of this city in a while. With jerky steel-drum-sounding guitar improvisations over Beach-Boys-esque vocals, they are can be classified as nothing other than experimental-psychedelic-pop-rock-semi-reggae. Their set stayed in constant motion, with the members taking only one short break between songs to give the necessary thank you to fans. But this is because their constantly shifting time signatures and spliced-together synthesizer rhythms require an intense focus. What seems random and impromptu at first hearing is actually a highly demanding exercise, as evidenced by the determinedly hard-working expression of guitarist-vocalist Eve Alpert.

However, because of the creative intricacies that have become this band’s signature sound, they can be a challenge for distracted, beer-filled fans to keep focused for the whole set. Often, the band would briefly follow the logical sequence of a rhythm, which would have fans gently swaying along, until Palm randomly flipped the entire song on its head and began pursuing a completely unrelated rhythm. The experimental side of Palm is impressive, and there are few bands, especially local ones, who can achieve their synchrony over such ambitious music theory, but like Waxahatchee’s acoustic set the day before, they had trouble holding the crowd’s attention at this laid-back festival.

These hometown heroes were the long-awaited Saturday night headliners for the festival, attracting the youngest audience of the weekend. After announcing on their Instagram earlier that day that this set would be their last in Philly for a while, the Districts came out ready to give a powerfully rip-roaring dose of gritty rock to the sold-out room of fans.

Throughout the set, the band elongated songs with soaring guitar solos that sent members of the crowd into the air with them, crowd-surfing over the wave of supportive hands. The more accessible, suburban side of this band’s version of Philly rock even had the older fans bobbing around as they nursed what was probably their tenth IPA of the day. Coming back on at the end for an encore, the band ended the main two days of the festival on a triumphant and hopeful note, as real and tangible markers of the vibrant success musicians from this city can achieve.