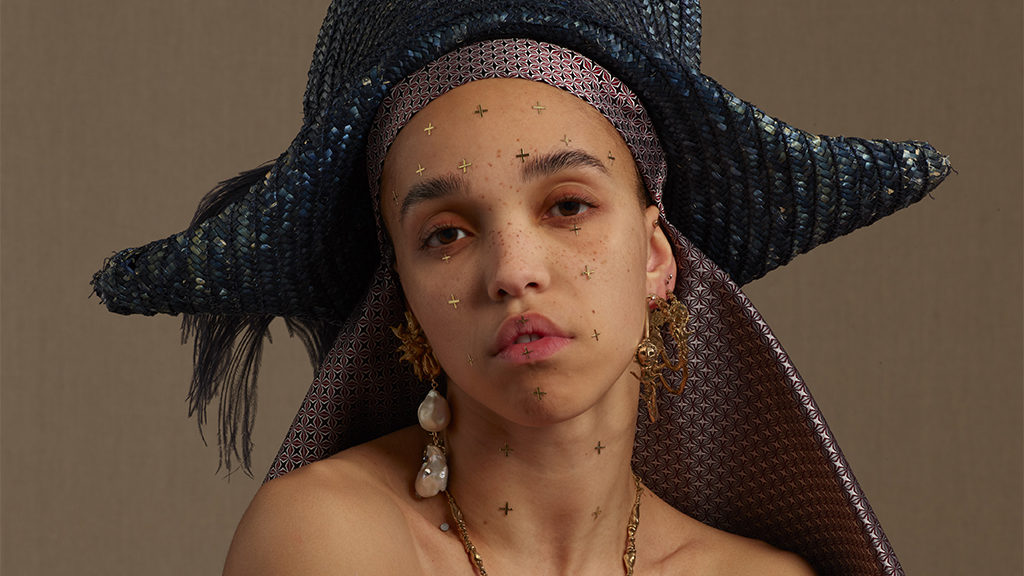 Even if she hasn’t always felt traditionally beautiful, FKA twigs has always felt different. For her, this is her strength, and her long-awaited second album MAGDALENE presented an artist reflecting on and accepting this. In the five years between her first album LP1 and her 2019 sophomore effort, twigs dealt with complete upheaval in her personal life: a high-profile breakup and a serious health episode. Born out of twigs’ reckoning with herself in the wake of transformative pain, the album is lyrically honest, deeply metaphorical, and unabashedly personal.

MAGDALENE was named for Mary Magdalene, who, to twigs irritation, is misremembered in history as a prostitute. With the album’s implicit challenge, twigs works to comfortably lean into her own everchanging person. She challenges musical conventions with her own flair, balancing traditional and experimental elements of R&B and alternative and art pop. And with “fallen alien”, perhaps more than any other song on the album, twigs explicitly taps into the eccentricity of her person and artistry. She’s raw, even a bit scary, and most of all—best of all—she’s pissed.

Nestled between two impassioned ballads, “fallen alien” is by far MAGDALENE’s most energetic song, and in contest for Most Experimental. On this sixth track, twigs strikes at her listeners, her detractors, and herself with ultimately surprising cohesion. Her anger pours out in lyrics, ebbs and flows through composition, and never fully lets up. Her masterful combination of lyrical simplicity and compositional experimentation builds a song both particularly complex and oddly complete.

And by its midpoint, it becomes clear that “fallen alien” is building up to something. In the song’s opening half, twigs introduces seemingly disparate elements in the opening that promise a cohesive explosion in the closing. From the first verse, twigs layers her own vocals to play with the delivery of her lyrics, creating an echoing, haunted atmosphere. The song starts slowly but firmly, twigs’ anger building, her distrust in her relationship growing building as she sings once, then twice “I was waiting for you, I was outside/Don’t tell me what you want ‘cause I know you lie”. Meanwhile, her layered vocals paired with chaotic, thrashing instrumentals provide an internal monologue of true anguish.

twigs’ chorus reins back and continues to do so throughout the song. Sad piano blends with a distorted guitar strum as she describes herself as a “fallen alien”. In the chorus, the alien is increasingly confused by a lover she’s allowed to change her, but there is also underlying frustration with herself. “I never thought that you would be the one to tie me down”, she sings, as though not understanding how she got a point that another could or would do such a thing to her.

The expressions of her personality and art have never felt alien to herself, as one would expect the case to be, but elsewhere she has acknowledged that those expressions and herself might be perceived as such by others. She chooses to lean into that difference, as is the point of the album, and on this track, she cleverly exchanges the traditional notion of the beautiful fallen angel for that of the otherworldly alien.

Her anger, communicated gently in the chorus, picks up again in the second verse. She plays with light and darkness, placing herself in the light and her partner in the dark: “In the blazing sun I saw you/In the shadows hiding from yourself” and “When the lights are on I know you/See you’re grey from all the lies you”. twigs finally sees her partner, even if they cannot see themselves. As she repeats these lines a second time, her overlapping vocals sing words from the first verse— “I was waiting for you, I was outside”—as though her own swirling thoughts challenges her partner’s dishonesty and her own passivity.

Meanwhile, the song has continued building in through its composition, where the rage twigs has tried to contain comes to a head, explosively. She delivers the ending lines of verse two under energetic, bouncing instrumentals: “When you fall asleep, I’ll kick you down/…Now you’re on your knees”. This may be why the final verse, “I feel the lightning blast”, come across as a revelation, one that’s been building since verse one’s unfinished “I feel” and “I feel the light”. Now seeing her lover on their knees, twigs finds the words for her realization, “the lightning blast”, marking the start of the song’s second half before moving into the chorus that again ebbs the song’s rage.

Having used the first half of “alien” to establish each element—her overlapping vocals; the haunting atmosphere and robust instrumentals; the peaks and valleys of her rage—twigs brings them all back in the second to create her stunning finale. The third verse builds immediately, repeating verse two with even more intensity in the chaotic element of her song’s sound. There isn’t another chorus, no need for one, as the full force of twigs’ emotion finally release with a final “I feel the lightning blast”. If the first one was realization of her situation’s truth in the face of a lover’s dishonesty, this final one is a declaration: she sees what her relationship is doing to her and she is vehement in her choice to reject it. It’s an ending as powerful as the artist delivering it.

This strange song probably shouldn’t work as well as it does; “fallen alien” is laced with rage that threatens towards unmanageable—to her lover, to herself, the sort that fades and grows until it is all but uncontainable. But twigs’ ability to do much with little is the heart of its brilliance; in amplifying simple lyrics with complex composition, twigs passionately sings the story of a relationship in decline, in need of change—both with her partner and herself, as only she can. “fallen alien” shows the ways in which FKA twigs challenges herself and those who view her art, loudly—a testament to her alien genius.