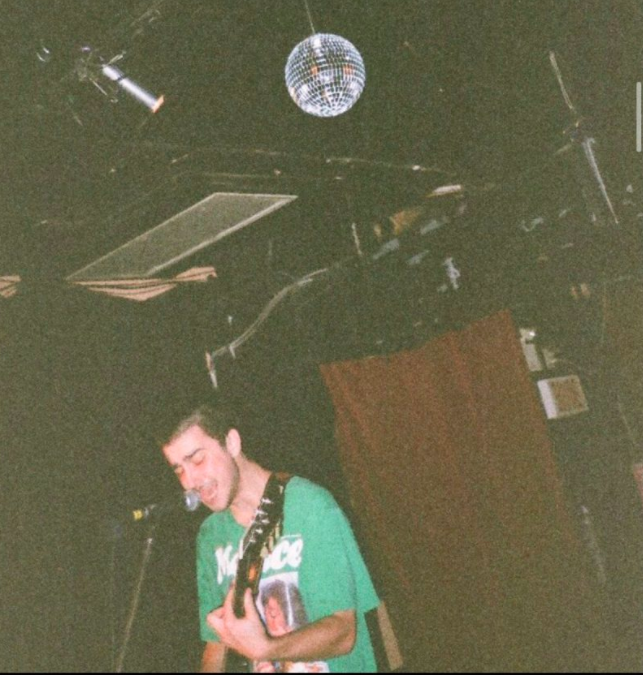 Societal Siege is a Montreal-based band led by singer-songwriter Jacob Barton. Although he’s originally from Kitchener, Ontario, he spoke about how Montreal brought the band members together and helped them grow. Read more to learn about the evolution of Societal Siege and their upcoming album Dennis, which will be released on April 23rd.

WQHS: So hi. I am very happy to be interviewing you today.

Jacob Barton: Dude I am super fired up to be in this Zoom chat.

WQHS: First I wanna ask how you’re doing in light of everything with the coronavirus.

JB: It kinda sucked for a bit because I was like, oh shit. I’m now in Ontario again and I can’t hang out with my friends since my parents won’t let me because of quarantine. So that sucked for a few days. But then I was like I might as well use this time to hang around, you know, recharge and shit.

WQHS: I’m glad to hear you’re doing well! I wanted to learn a little more about Societal Siege. From what I understand, it started as a solo project and then you slowly introduced more band members. How did that transition happen?

JB: Yeah. So, I did start out by myself and I would just record for my friends. But then one summer, I came home from Montreal and my friends were like, “Hey, you should play a show at our garage.” And I was like, “I’ve never done that, so I don’t know.” But then I hit up my buddy Oliver and he played drums for us at a quick show. But I was always really stingy on having other band members because I was in a band before and my band member was kind of toxic so I didn’t want that again. But then my friend Nathan was like, “Hey, I have a friend moving up to Montreal, his name’s Drew and he’s really great at drums. You guys should get together.” I was like, maybe. And then I finally met Drew and was like, dude, you should play drums. And then I picked up Kris. And then I started living with Antoine and he started playing bass. But I feel like it was very tough for me to let people into the process.

WQHS: Okay, that’s very fair. So my next question is where does the name Societal Siege come from?

JB: So, in my grade twelve world issues class I was writing an essay about something and I was like “This country is under societal siege.” And my teacher circled it and put question marks and it was the only thing he circled on my essay and I was like, “Damn, that’s kind of funny” and it became the name.

WQHS: Who are some of your biggest musical influences?

JB: So overall, Surf Curse, Current Joys… All of Nick Rattigan’s projects, I guess. Algernon Cadwallader for sure, love those boys. But right now, over the course of recording Dennis and stuff, it’s been Lil Uzi, specifically Eternal Atake, and Wavves. I listen to a lot of Wavves’s live performances and their drummer.

WQHS: Well I guess we’ll just have to wait and see their influence for ourselves! Okay, you kind of mentioned before that you were reluctant to let people into the creative process. So, I kind of wanted to hear a little more about what that process looks like and how you write your songs.

JB: I feel like it’s always changing. For a long time, I would try to write chords on a loop pedal and then write riffs to it. But, lately I’ll be listening to a song and I’ll be like, I want that kind of energy and then I’ll write the chords. The vocal melody is usually the hardest because I feel like it should stand out, and I don’t love my voice.  Lyric-wise I used to write about past relationships, but these days, I feel like it’s much more I’m writing these letters down to myself or bringing my insecurities or things I think about to the surface so that they’re out there for myself. And I like writing about TV shows and putting little hints about Hunter X Hunter or something.

WQHS: What’s the story behind the character that’s your profile picture on SoundCloud and Instagram?

JB: Oh, that’s from an anime called Initial D. It’s the only anime I watch dubbed. This rapper Xavier Wulf would always talk about him. And then I was like, oh, shit, I got to watch the show. And one of the coolest things he says is when he’s sitting there with that dart like that. So I was like “I gotta take that.”

WQHS: Thank you for explaining that! Well, I was listening to your music this morning and I did notice that there was kind of a shift in your sound from your first few songs on SoundCloud, which I felt like were more acoustic focused or folky like your song At Home. And then your most recent E.P. Joseph Ziggler was more intense. I was thinking specifically about the song “Put Your Fivers In a Sack,” which I feel like was really high energy. How can you kind of explain that shift in the sound? Or was it subconscious?

JB: Probably a bit of both. Actually, I think the shift was just moving to Montreal and feeling grimier and not to sound like a headass or whatever, but it’s super grimy and kind of dark there so I think subconsciously I was trying to reflect that. But I was also trying to sound a lot like Surf Curse. I really wanted to write songs that people could mosh to instead of just like cry with a lighter. Yeah. So, I feel like that was the main thing, just to have energy.

WQHS: I feel like you’ve been talking a lot about Montreal and even on Joseph Ziggler there’s a song titled “Montreal.” What pushed you to move there?

JB: Probably the drinking age. No, I’m just kidding. Just university. I got accepted to McGill and my sister lived there and she was like, it’s fire here. And I was like bet! Yeah, I think it was basically just all school motivated.

WQHS: And you study music there?

WQHS: How has being in Montreal helped or hindered your musical career?

JB: Like I said, the griminess and maybe moving away from home and feeling lonelier and feeling a more concentrated amount of emotions. But Montreal exponentially made my musical career better, I think, because I had never done live shows before until going to Montreal. It was something I never thought about either up until moving there. So that’s probably a huge one. And meeting Drew and Antoine. That’s also a huge thing. But yeah, and I think moving to Montreal and lending myself to new people that I had never met before.

WQHS: Well thank you for sharing that with me. And now I kind of wanted to delve into this new album you’re working on. I’ve been hearing some whispers on the street about it and I know Philly gets a little shout out on one of your songs. Can you tell me more about what we should expect from it?

JB: It’s called “Dennis.” I got my friend Kris on a lot of the songs so it’s kind of a feature album, I guess. It’s definitely more like “Put Your Fivers in A Sack” and less like the previous SoundCloud stuff. And it’s talking a lot about this guy named Dennis, who’s not really a guy. I’m always shifting what I think Dennis is and represents. He’s like shapeless like Orochimaru or something, you know. It’s heavier in nature, I would say—it’s more like a project and less like a collection of songs like Joseph Ziggler was. And yeah, it was really fun recording it because I did it a lot at my friend Scott’s house and we would just day drink at like 1 o’clock and I would smoke a lot of weed and just get belligerent and fall asleep on his floor every once in a while. But yeah, it means a lot because Scott’s moving back to Philly soon and I got to spend a lot his last few days in Montreal with that guy while recording this thing.

WQHS: That’s really sweet. My last question is about how has COVID-19 may have influenced your music, in terms of your ability to produce and create?

JB: A lot, I think, because I’ve been watching a lot of Kenny Beats videos and his Twitch streams now, I know it’s not like on the same vein of music. But all the production stuff he talks about and his vocal templates and shit have really helped me be faster, because a lot of that stuff takes me days to do like a keyboard part and now it’ll take 20 minutes because of all the videos I watch of his. And yeah, just wanting to create more, feeling really motivated. A lot of the lyrics on Dennis are also about being locked inside so I guess that’s another thing. But it hasn’t changed a lot of things that much because Joseph Ziggler was recorded with Drew being out of town. And it was a lot of us sending shit back and forth so we’ve returned to that format, it’s very funny.

WQHS: Okay awesome. So when can we expect to hear Dennis?

JB: Is it the seventh today?

WQHS: Yeah but you know, time is not real.

WQHS: I’ll be waiting anxiously on the edge of my seat for the 23rd then.

Stay tuned for Dennis on April 23rd, 2020, and until then check out Societal Siege on:
Soundcloud
Spotify
Bandcamp
Apple Music
Instagram